The Coca-Cola Co (NYSE:KO) manufactures, distributes, and markets nonalcoholic beverages worldwide. This dividend king has paid uninterrupted dividends on its common stock since 1893 and increased payments to common shareholders every for 55 years in a row. Warren Buffett’s Berkshire Hathaway Inc. (NYSE:BRK.B) is the largest shareholder (1) of the world’s largest beverage company.

The company’s last dividend increase was in February 2017 when the Board of Directors approved an 5.70% increase to 37 cents/share. Coca-Cola’s largest competitors include PepsiCo, Inc. (NYSE:PEP), Dr Pepper Snapple Group Inc. (NYSE:DPS) and Monster Beverage Corporation (NASDAQ:MNST).

Over the past decade this dividend growth stock has delivered an annualized total return of 8.90% to its shareholders. 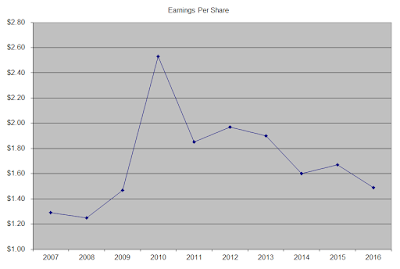 Overall, I am not satisfied with the lack of earnings growth over the past four years. As a result, dividends have increased mostly through the expansion of the dividend payout ratio. This is not sustainable. Without further growth in earnings per share, I would be impossible to maintain the streak of annual dividend increases. The high valuation, and the lack of growth in earnings per share over the past four – five years do not bode well for an investment in Coke today.

The company’s return on equity has been on the decline over the past decade, falling from a high of 30.90 % in 2007 to a low of 27.60% in 2016. Rather than focus on absolute values for this indicator, I generally want to see at least a stable return on equity over time. 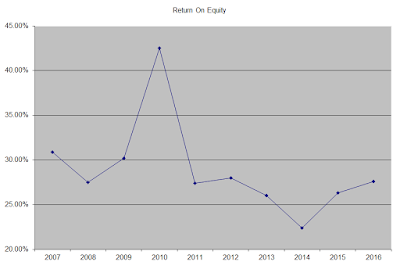 The annual dividend payment has increased by 8.50% per year over the past decade, which is higher than to the growth in EPS. 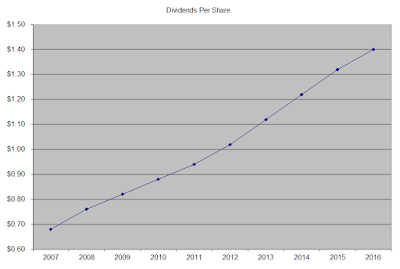 An 8.50% growth in distributions translates into the dividend payment doubling every eight and a half years. If we look at historical data, going as far back as 1966 we see that The Coca-Cola Co (NYSE:KO) has managed to double its dividend almost every seven years on average.

The dividend payout ratio has increased gradually over the past decade. Using the earnings estimates for 2017, the forward payout ratio is a more reasonable but still high 77%. A lower payout is always a plus, since it leaves room for consistent dividend growth minimizing the impact of short-term fluctuations in earnings. 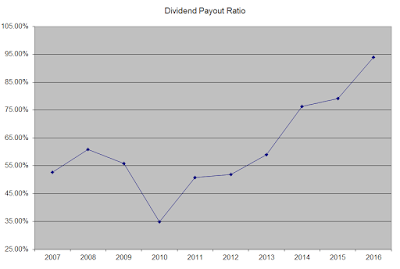 Currently The Coca-Cola Co (NYSE:KO) is overvalued at 21.10 forward 2016 earnings, yields 3.60% with a high payout ratio. In comparison, PepsiCo, Inc. (NYSE:PEP) is trading at a P/E of 22.10 and yields 2.80%. Given the lack of earnings growth over the past four years, and the high valuation, I am not interested in adding to the stock. In the meantime, I am going to patiently hold on to my existing holdings, but reinvest the dividends elsewhere. If Coca-Cola cuts dividends, I will be out of the stock one second after the announcement.