There are some places where you can’t get a bad meal or a bad drink, Paris, Frisco, New Orleans. When I went to Paris I discovered cidre, apple cider with a kick. It went down all too easy with savory crepes and my friend and I were pleasantly surprised at how much we liked it (a little too much). Now Americans are discovering cidre.

Cidre or hard cider (basically fermented apple juice), appeals to Millennials age 22-29, women who don’t care for beer, and those who can’t tolerate the gluten in beer, helping it grow from a niche beverage to wider acceptance. Sometimes cider is even called a malternative!

Strangely enough, cider was once the drink of choice in early America, around since Pilgrim days. After losing its prominence after the Civil War with the influx of German immigrants and their brewing prowess beer sales are down and cider is once again gaining favor, now one of the fastest growing alcoholic beverage segments. How the worm has turned. Food historians aver that even before Prohibition the beer companies lobbied for federal regulations to prohibit the sale of cider with preservatives, although wine and beer had no such ban.

The growing popularity of cider is not lost on beer giant Anheuser-Busch InBev NV (ADR) (NYSE:BUD) which is debuting Stella Artois Cidre after introducing Michelob Light Ultra Cider last spring. They are touting cidre as similar to wine and it can somewhat resemble sparkling wine but cidre tastes like really good American cider. They advise serving it in wine glasses as opposed to beer glasses.

In Paris cider is often served in a heavy glass tumbler as it’s really in a beverage category all its own, neither wine nor beer. However, if the cider has an alcohol content of more than 8% it will technically be a wine according to US regulation.

Boston Beer Co Inc (NYSE:SAM) has its own cider brand, Angry Orchard, (what a great name) competing with Anheuser-Busch InBev NV (ADR) (NYSE:BUD). Heineken bought British brand Strongbow cider last year and Miller Coors bought Crispin Cider last year. While cider has long been the bailiwick of small craft cidermakers like The Vermont Hard Cider Company which reported 30% growth in sales from 2011 to 2012, the big boys want a piece of the apple pie.

Cidre or hard cider manufacture has drawbacks as listed in Boston Beer Co Inc (NYSE:SAM)’s annual report, sourcing the right type of apples, availability and health of the crop, etc. Even now apple trees take over five years (more like seven) to produce enough apples compared to a single summer for barley. Boston Beer Co Inc (NYSE:SAM) sources most of its cider apples from France and Italy. American apples are mainly grown for eating and juice and aren’t tart enough.

Which brewers will continue to soar? 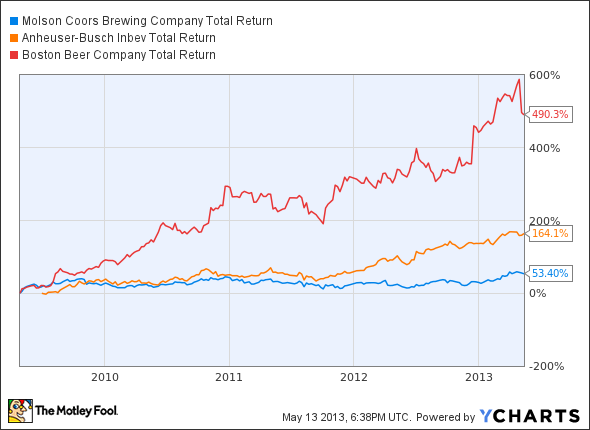 Ciders are currently a tiny percentage of sales for each of these. Boston Beer Co Inc (NYSE:SAM)’s total return has outperformed its bigger brethren with the growth of the craft beer movement. Will cider even the score?

Anheuser-Busch InBev NV (ADR) (NYSE:BUD) as the biggest global brewer will likely benefit least due to size. The company is competing with other major brands like SABMiller and the aforementioned Heineken all participating in an “amber rush” of acquisitions in the industry. It will complete its purchase of Grupo Modelo, famous for Corona beer, by the end of this month. However, it will probably not be accretive until 2014.

Anheuser-Busch InBev NV (ADR) (NYSE:BUD) may have economies of scale but much smaller Molson Coors (NYSE:TAP) (market cap $9.16 billion) has 30% of the US beer market and so should see some impact from Crispin Cider. It has the lowest forward P/E of 11.82 and the highest yield of 2.60% with a less sustainable payout ratio of 58%.