The Boeing Company (BA) Shares Get Some Irish Spring

The S&P 500 (INDEXSP:.INX) declined by roughly a quarter of a percentage point today — its first loss of the month. However, the narrower, price-weighted Dow Jones Industrial Average (INDEXDJX:.DJI) did manage to extend its March winning streak — by a hair’s breadth — with a 0.02% gain. The Dow’s eight-day streak is the longest since February 2011. For a discussion of the potential significance of winning streaks, let me refer you to yesterday’s column.

Consistent with a decline in the broad market, the VIX , Wall Street’s fear gauge, dropped 6% to close at 12.26. (The VIX is calculated from S&P 500 option prices and reflects investor expectations for stock market volatility over the coming 30 days.) 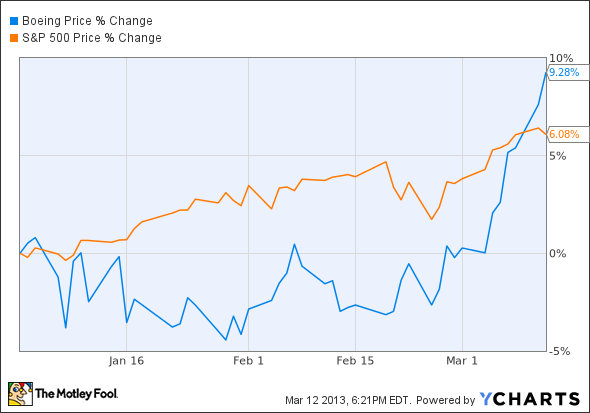 Perhaps the share performance isn’t simply the product of rose-tinted glasses after all. This morning, the Irish Independent reported that low-cost airline Ryanair has placed a massive $18 billion order for 200 787s. According to the report, President Obama and the Irish prime minister, Enda Kenny, are set to confirm the order next week. On the back of this news, The Boeing Company (NYSE:BA) shares rose almost 1.5% today, to close at $84.16 — their highest closing value since November 2007. I continue to think The Boeing Company (NYSE:BA) and investors may be underestimating the delay in getting the 787 Dreamliner back in the air, but I have to give it to the market: The shares’ resilience no longer looks like luck … of the Irish.

The article Boeing Shares Get Some Irish Spring originally appeared on Fool.com.