The wealth-building power of compound interest will never cease to amaze me. It’s a story of patience and attention to detail, where small differences in the short term add up to massive divergence over decades. In the end, the biggest winners don’t always deliver the fattest share-price returns.

Bank of America Corp (NYSE:BAC) slashed its dividend by 98% when the housing bubble popped in 2008. Regulatory oversight and financial stress tests have kept the annual payouts down at just $0.04 per share for a minuscule 0.3% dividend yield. At these rates, it will take a long time for Bank of America shares to build any real wealth for income investors.

But recent rumblings indicate that the Fed might let this megabank raise dividends again. Fellow money-center bank Wells Fargo & Co (NYSE:WFC) was able to inch payouts up as soon as 2011 and has quadrupled its dividend rates over the last three years. JPMorgan Chase & Co. (NYSE:JPM) multiplied its payout fivefold in 2011 and has stayed strong ever since. These increases prove that the largest banks aren’t necessarily too big to succeed.

Their dividend moves actually have a direct effect on Bank of America Corp (NYSE:BAC). The last time Wells Fargo & Co (NYSE:WFC)boosted its payout, the news sent B of A shares up nearly 2% on an otherwise slow news day. Investors do take rival bank moves as an indication of things to come for this giant.

What if?
Both Wells Fargo & Co (NYSE:WFC) and JPMorgan Chase & Co. (NYSE:JPM) have just about restored their payouts to pre-crisis levels. What if Bank of America Corp (NYSE:BAC) were allowed to do the same? Here’s how the bank’s dividends helped investors beat the market in a different era: 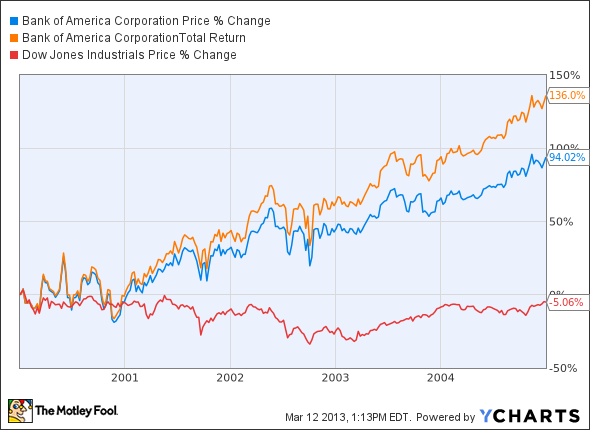 Yes, Bank of America crushed the Dow Jones Industrial Average in the early aughts, with or without dividends. The real-estate bubble was just blowing up and getting ready to pop.

Focus your attention on the gap between straight-up share price gains and total, dividend-adjusted returns. Those steady payments added up to a 42% stronger total return on your investment. Not bad for just five years of market action.

Where did that spread come from?
It’s the same old story you’ve heard a million times before. Bank of America Corp (NYSE:BAC)’s long-term shareholder value rested on a generous and always growing dividend policy