Today’s only U.S. economic release was the second and final revision to Q1 GDP. The Department of Commerce reported that GDP grew just 1.8% in the first quarter, down from a previous estimate of 2.4%. 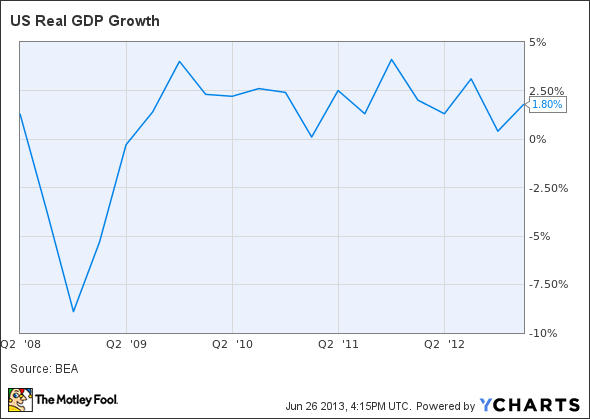 Perversely, this seems to be a positive for the market, as investors believe a weaker-than-expected economy will lead the Federal Reserve to continue its asset purchases for longer than anticipated. Last week, Fed Chairman Ben Bernanke sent the markets tumbling after he said that the economy is strengthening and that the Fed could begin tapering its asset purchases as soon as the end of the year. The market did not believe the economy was as strong as the Fed seemed to think, and today’s GDP report gives some credence to that view.

Currently, the Federal Reserve is buying $85 billion worth of long-term assets each month in an effort to hold down rates and spur the economy. The Fed has said it will continue the asset purchases until inflation hits 2% to 2.5%, unemployment falls to 6.5%, or long-term inflation expectations skyrocket. While the continuation of asset purchases is good for the economy, investors should realize that the market is being artificially propped up by the Fed, and if the Fed even thinks about slowing quantitative easing, the market will slide.

Today’s Dow leader
Today’s Dow leader is The Boeing Company (NYSE:BA), up 2.1% after competitor Bombardier delayed the flight of its new CSeries Jet for the second time, now scheduling it for July. The CSeries, which has only 200 orders so far, is a narrow-body jetliner that will compete with The Boeing Company (NYSE:BA)’s 737. Fool analyst Adam Levine-Weinberg recently took an in-depth look at the plane and the challenges it’s facing. You can read more about it here.

PC sales saw their biggest percentage drop ever in the first quarter, and industry research firm IDC attributed this partly to Windows 8, which was too radical a departure from previous Windows operating systems. There’s some hope that PC sales could get better in the third quarter.

Today is the start of Microsoft Corporation (NASDAQ:MSFT)’s three-day Build Developer Conference, where the company has invited developers to come and hear about new changes to its services. At the conference, CEO Steve Ballmer unveiled an update to Windows 8 with a release called Windows 8.1. The updated version of Windows 8 brings back the familiar “Start” button and features some other updates. We’ll have to wait and see whether these changes are enough for consumers to change their tune on Windows 8.

The article 2 Stocks Leading the Dow Higher originally appeared on Fool.com and is written by Dan Dzombak.