While the Case-Shiller home price index is reflective of a strengthening housing market, it’s a bit worrisome that consumer confidence, durable goods excluding transportation, and new-home sales were all down. Consumer confidence fell from 68 in February to 59.7 in March over concerns about the sequester. While this is just a survey of consumers’ opinions, it often is a leading indicator for retail sales. If retail sales follow consumer confidence downward, it will be bad news for the U.S. economy, 70% of which is based on consumer sales.

Housing
The Case-Shiller composite 20-home price index was up 0.1% in January, marking an 8.1% rise over the past 12 months. While prices were up, new-home sales dropped in February to a seasonally adjusted annual rate of 411,000. That may be down from January and below analyst expectations, but that level is still high relative to the past few years. Housing was a strong point for the economy in 2012. Hopefully that will continue in 2013. 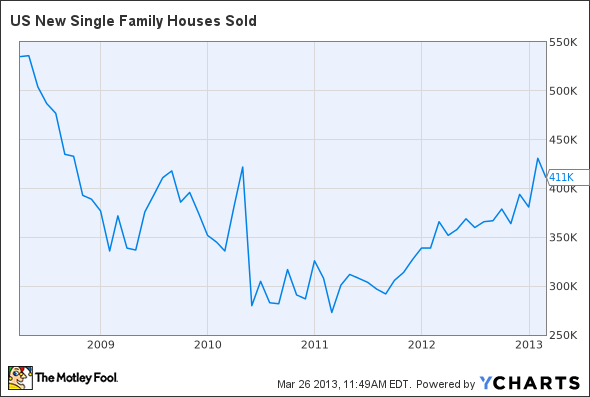 Today’s Dow leaders
Today’s Dow leader is The Boeing Company (NYSE:BA), up 2%. Yesterday The Boeing Company (NYSE:BA) completed its first test flight of the 787 Dreamliner with an updated lithium battery system since the jet was grounded on Jan. 16 by the FAA. Once all tests are completed to both U.S. and Japanese regulators’ satisfaction, the company will update the battery systems in the 50 Dreamliners that have already been delivered.

This is embarrassing for The Boeing Company (NYSE:BA) in the short run, but as I’ve said throughout this ordeal, the Dreamliner’s problems are being overblown by the press and will be a minor blip in the 30- to 50-year future of the aircraft.

However, the PC microprocessor market is maturing, and Intel Corporation (NASDAQ:INTC) must find new avenues for growth. In this premium research report on Intel, our analyst runs through all of the key topics investors should understand about the chip giant. Click here now to learn more.

Third for the Dow today is Hewlett-Packard Company (NYSE:HPQ) up 1.6% on no real news. Hewlett-Packard Company (NYSE:HPQ) has rocketed up 65% so far this year after investors pushed it down too far in 2012. In fact, the stock fell so far that it, too, made the 2013 Dogs of the Dow with its then-dividend yield of 3.72%. After this year’s share price gains and last week’s announcement of a 10% boost to the dividend, the stock has a forward yield of 2.5%.