The Boeing Company (BA), General Dynamics Corporation (GD): What ‘Made in the U.S.A.’ Truly Means

When most people see products labeled as “Made in the U.S.A.,” they tend to think of factories located within our borders, with workers earning at least minimum wage producing well-made products superior to cheaply outsourced goods from Southeast Asia. If you’re one of those people, you’re in for a rude awakening. Today, “Made in the U.S.A.” should more accurately be re-branded as “Made in U.S. Prisons.”

The rise of the prison-industrial complex over the past two decades has changed the face of American labor forever, as it uses prisoners – who are unprotected by all the laws governing the private sector – to produce everything from chairs to computer parts to missiles, for roughly $0.23 to $1.15 per hour.

Therefore, with an able-bodied workforce at its disposal, what’s to keep the federal and state governments from transforming prisons into domestic factories to serve the government and multinational corporations? Not much, apparently.

The common perception of penal labor is usually that of prisoners hammering out license plates, washing laundry or chain gangs picking up litter. The reality is that these prisoners create much more, as part of
UNICOR, the for-profit corporation that was formerly known as Federal Prison Industries. The company operates 110 prison factories at 79 federal penitentiaries, and manufactures products ranging from clothes to solar panels.

Three thousand of those prisoners at 14 UNICOR prison factories manufacture land, sea and air defense devices for the U.S. government through its subcontractors, such as The Boeing Company (NYSE:BA), Lockheed Martin Corporation (NYSE:LMT), General Dynamics Corporation (NYSE:GD) and Raytheon Company (NYSE:RTN). These subcontractors purchase the parts assembled by UNICOR at cheap prices, assemble them and sell them to the Pentagon as advanced weapon systems.

While some people may argue that using penal labor to produce national defense products is acceptable, should that labor be outsourced to publicly traded corporations to strengthen their bottom lines? In the past, state prisons have provided labor for corporations such as Bank of America Corp (NYSE:BAC), AT&T Inc. (NYSE:T), Starbucks Corporation (NASDAQ:SBUX), Chevron Corporation (NYSE:CVX), and Wal-Mart Stores, Inc. (NYSE:WMT), among others.

Proponents believe that manufacturing a variety of products rehabilitates prisoners, giving them extra skills to gain employment upon returning to society. Meanwhile, state funds are being used efficiently, since prisons are profiting from the deals made with the companies.

Opponents believe that using prisoners – who don’t have Social Security benefits, health plans, pensions or union representation – to work for multinational corporations at third world wages is a form of legalized slavery. In addition, studies have shown that rising prison labor has taken jobs from the private sector, resulting in higher unemployment.

Let’s take a look at Wal-Mart’s relationship with the prison-industrial complex to better understand how the system works. Although Wal-Mart once stated that it forbids its vendors from using prison labor, a Huffington Post report from two years ago revealed otherwise.

Wal-Mart’s primary supplier of agricultural produce is a company called Martori Farms, which Wal-Mart showcased in 2007 as part of its “Salute to America’s Farmers” program. In reality, many of these “farmers” are state prisoners.

Martori Farms operates three farms in Arizona and one in California. In Arizona, the farm employs prisoners at its farms to work at approximately $2.00 per hour, not including travel time between the farm and the prison. Signing up for this labor is voluntary, since inmates who perform labor within the prison walls only receive $0.10 to $0.50 per hour.

In my opinion, although $2.00 an hour is far below the minimum wage, it is a far cry from the “legalized slavery” that liberal critics claim Wal-Mart and Martori Farms are engaged in.

Considering the profitable nature of these prisons, and the explosive growth of the U.S. prison population, it was only a matter of time before private companies built their own prisons. State prisons are currently at a 96% occupancy rate, while federal prisons are overflowing at 140%. The total prison population is rising 8% annually, but only 8% of prisons have been privatized.

Corrections Corp (NYSE:CXW). of America and Geo Group (NYSE:GEO) are two of these companies. Both companies, founded in the early 1980s, capitalized on the “war on drugs” in the 1980s and 1990s, which brought in a rapid influx of drug offenders that caused state prisons to overflow. Over the past decade, Corrections Corp. and Geo have also profited from locking up illegal immigrants, as part of an aggressive federal initiative to deter illegal immigration.

Have they been profitable? From the following chart, I’d say the answer is a definite ‘yes’. 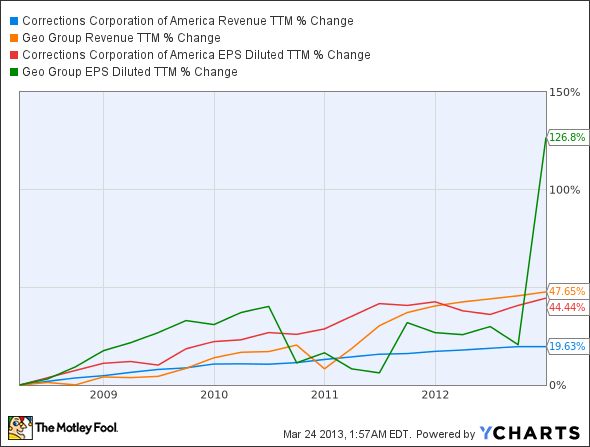 Both Corrections Corp. and Geo Group also recently converted themselves to REITs (real estate investment trusts), where 90% of taxable income must be redistributed to shareholders as dividends, in exchange for lower tax rates.

This bumps Corrections Corp.’s dividend up to $2.12 annually – a 5.5% yield, while Geo Group pays $2.00 annually, or 5.6%. Those fat yields, coupled with robust price growth over the past five years, make these investments appear fairly attractive to income investors. 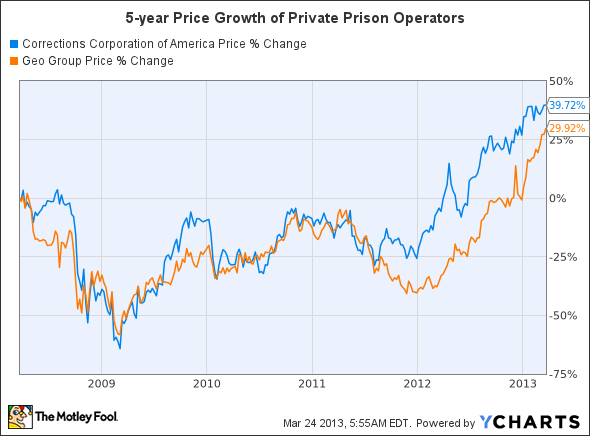 Now that prisons have become a large, legal source of cheap domestic labor, is it ethical to invest in the industry?

In my opinion, the prison-industrial complex isn’t as amoral as liberal pundits make it out to be – since much of the work is voluntary, and the wages, while low, are still higher than those of in-house prison jobs. Yet outsourced prison labor isn’t as harmless as conservative supporters claim it to be. UNICOR has been accused of exposing prisoners to toxic substances in its electronics recycling operations.

Regardless of your view on prison labor, the harsh reality is that America’s prison-industrial complex is rapidly growing, and that labor is now growing symbiotically with corporate America, due to competition from cheap labor in Southeast Asia and other emerging markets. This fact will remain constant for the foreseeable future, and redefine what it truly means to be “Made in the U.S.A.”

The article What ‘Made in the U.S.A.’ Truly Means originally appeared on Fool.com and is written by Leo Sun.