Amazon.com, Inc. (NASDAQ:AMZN) ​ currently trades at a whopping 3500 times trailing earnings. Analyst expectations are for $1.47 in EPS for the current fiscal year, and the current stock price is still 181 times that figure, compared to its peer average of 22. Amazon has a free cash flow margin of less than 1 percent, and the enterprise value implied by the current stock price is 45 times trailing EBITDA, much higher than the rest of the industry.

Analysts expect revenue growth of 23%-25% this year, and if the company can still somehow manage to grow its free cash flow at a steep 25% rate for the long term — discounting that back, fair value on Amazon still comes out around $155 — it will be one of, if not the, most expensive large cap company today.

Even with a two-point concession in the discount rate to other established companies in the services industry, Amazon looks meaningfully overvalued today. I believe Amazon’s earnings are simply not growing fast enough to justify its lofty valuation.

The numbers above certainly don’t justify buying Amazon.com, Inc. (NASDAQ:AMZN). The company has incessantly posted year-over-year declines in the quarterly earnings. Amazon currently has an operating margin of less than 4%; whereas with more than 7-times Amazon’s revenue, Wal-Mart Stores, Inc. (NYSE:WMT)’s operating margin of 8% is double than that. By operating on such a thin margin, future costs of upgrading its infrastructure, expanding into new areas and increased competition could erode billions more from its operating profit.

With the ability to offer shoppers the chance to see and touch a product before purchasing it, retailers like Wal-Mart always had/have an advantage over the websites in the e-commerce sales industry. Amazon and other e-retailers did try to offset that by offering same-day delivery for some products. But Wal-Mart fought back with its own same-day delivery service by using its wide network of superstores as distribution centers.

Moreover, in the effort to offer the lowest prices, Amazon ends up making less profit on each of the products it sells. Consequently, this translates into a non-linear and lower gross margin for Amazon than Wal-Mart. 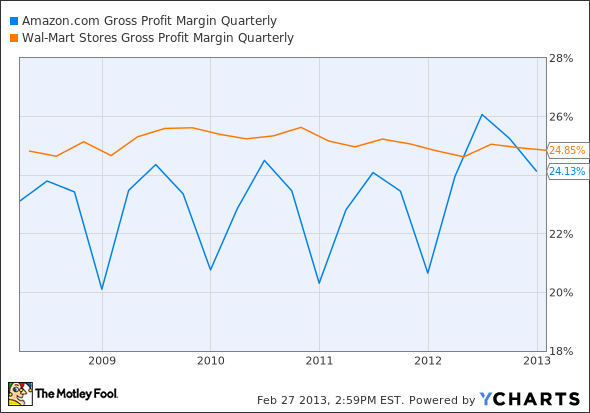 But what surprises me the most is how Amazon’s share price have continued to rise and reach new highs, even when the company’s core business model, which accounts for more than 95% of Amazon’s total revenue, has nothing but contracted. With core e-business guidance of about 17% revenue growth for the first-quarter of fiscal year 2013, which will be the sixth successive quarter of reduced year-on-year growth, Amazon can no longer be considered a growth company. 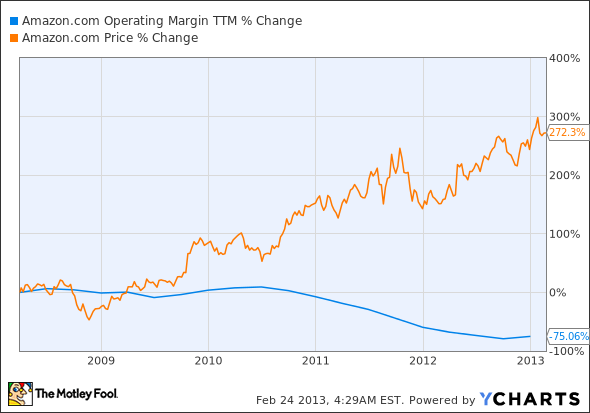 Moreover, the biggest competitive advantage that Amazon enjoyed for years is coming to an end — its ability to sell products without charging state sales tax to shoppers. Texas and California have already passed legislation that will ensure Amazon starts collecting the sales tax before long. That, along with the ever increasing costs of maintaining massive warehouses loaded with inventory, would surely put further dents in Amazon’s earnings in the future. As the chart above shows, the stock is certainly, albeit perhaps slowly, working its way to becoming a bubble.

Amazon also ensures that its products reach customers in the shortest amount of time possible. This is one of the reasons it has enjoyed excellent customer satisfaction over the years. But I believe, as postage and shipping rates increase, the company will come under further pressure from this rising operating cost. Moreover, Amazon’s foray into hardware has been nothing but a part-time hobby.

Enterprise Mobile Market: The Pentagon Opening its Doors to Apple and Google...