When it comes to technological innovation one man comes immediately to mind: Tesla Motors Inc (NASDAQ:TSLA) and SpaceX CEO, Elon Musk. The South African-born entrepreneur is revolutionizing industries in ways that others once considered impossible. Last year, Musk made history: after a successful launch of a SpaceX rocket, it docked with the International Space Station. However, privatizing space exploration is just the top of Musk’s laundry list of achievements.

One of Musk’s earlier achievements came in 2002 when eBay Inc (NASDAQ:EBAY) coughed up a cool $1.5 billion to buy PayPal, an online payments system co-founded by Musk. In many ways, PayPal has saved the online auction giant. In fact, PayPal now boasts 128 million active registered accounts and has grown to span 193 markets.

While PayPal is part of Musk’s rich track record of entrepreneurial successes, it’s small-time compared to his current undertakings.

These days, the SpaceX brainchild is busy building a world-class car company from the ground up. Since production began on Tesla Motors Inc (NASDAQ:TSLA)’s all-electric car last year, the Model S has passed many milestones including being crowned Motor Trend’s “2013 Car of the Year.” Although, with a visionary CEO at the helm like Elon Musk investors should expect more upside from here.

In a bid to revolutionize the automotive industry, Musk is finding inventive ways to attract drivers to his all-electric Tesla Model S. In the past few months, Tesla has released a new financing plan, lobbied its disruptive retail strategy to legislators in various states, issued free service for all Tesla Motors Inc (NASDAQ:TSLA) owners, unveiled a new “no-fault” battery warranty, and created a new loaner upgrade program that promises Model S owners the option to upgrade their vehicles for a discount cost.

What’s in a name?
With so many forward-thinking initiatives on the table, I think Tesla Motors Inc (NASDAQ:TSLA)’s momentum will carry into the quarters to come. Shares of Tesla Motors Inc (NASDAQ:TSLA) have climbed more than 57% year to date and should continue to climb ahead of the company’s earnings announcement later this month. As you can see in the chart below, more established automakers such as Ford Motor Company (NYSE:F) and General Motors Company (NYSE:GM) have posted year-to-date gains that are more modest. 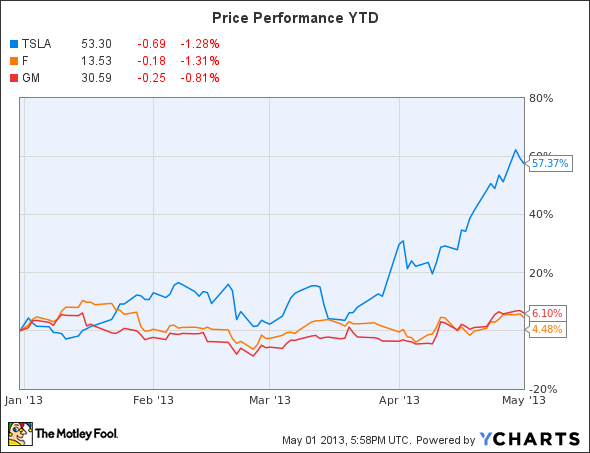 April auto sales at both Ford Motor Company (NYSE:F) and General Motors Company (NYSE:GM) clocked in at their highest levels in at least five years, according to CNN. Sales at Ford Motor Company (NYSE:F) spiked 18% from the year-ago period, whereas General Motors Company (NYSE:GM) reported an 11% increase in April sales. For more insight into Tesla Motors Inc (NASDAQ:TSLA)’s sales figures, we’ll have to wait until May 8 when Musk fills in investors on the company’s first-quarter financial results. Even so, Tesla Motors Inc (NASDAQ:TSLA) owes its current success to its founder and CEO. Thanks to Musk’s visionary leadership, Tesla has not only proven to be a viable business but also a disruptive innovator in the auto industry.

The article Everything This CEO Touches Turns to Gold originally appeared on Fool.com and is written by Tamara Rutter.