Tesla Motors Inc (NASDAQ:TSLA) has bled red ink since its initial public offering. However, the electric car maker expects to post a quarterly profit in 2013’s first quarter. That could mark an important turning point. 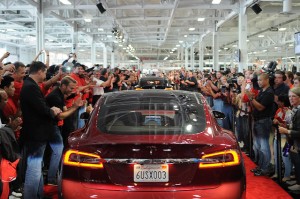 Tesla Motors Inc (NASDAQ:TSLA) has focused primarily on building expensive electric cars. However, in that, the company may have found a viable market. The first Tesla was an expensive race car (the Roadster) that only the rich could afford. It quickly became a sensation.

The second, a sedan, was to be built in two versions. A luxury model costing nearly $100,000 and a lower cost model with less range. Interestingly, the lower cost model, which packed a still hefty price tag of around $60,000, hasn’t seen much demand and is being dropped. Clearly, Tesla Motors Inc (NASDAQ:TSLA) has stumbled into the ultra-rich plaything category.

The idea of cars running on electricity took off with Toyota Motor Corporation (ADR) (NYSE:TM)’s Prius. Although not an electric only car, it proved that people were willing to consider vehicles that ran on something other than gasoline. And, at first, many customers were willing to pay a premium for that privilege.

Although Toyota Motor Corporation (ADR) (NYSE:TM) spent a great deal of time building the Prius brand, Bloomberg reported that in early 2012 the company had the pleasure of watching the Prius break into the top three nameplates, at that time trailing only Toyota’s own Corolla and Ford’s Focus. Clearly, an alternative car isn’t a fluke product.

When they first came out the Prius was a status symbol. However, Toyota Motor Corporation (ADR) (NYSE:TM) needs to sell more broadly than that to make money. So, at the end of the day, a Prius is a pretty affordable car, even without government incentives.

In fact, the strength of the Prius brand has been a breath of fresh air for Toyota as it has struggled with its top line since the 2007 to 2009 recession. The company may be one of the world’s best care makers, but it certainly hasn’t been one of the world’s best investments. While recent results show improvement, most would probably be better served looking elsewhere for now.

For aggressive investors, Tesla Motors Inc (NASDAQ:TSLA) could be a good alternative. The Prius’ mainstream success means that owning the car isn’t as big a deal as it once was. So, for the wealthy, a Tesla is pretty much the top of the line electric car. The Roadster cemented the high-end image and the sedan has made the Tesla a usable vehicle. The fact that the striped down version has sold so poorly is testament to the strength of the high-end appeal of the car.

Expensive products, while perhaps no more utilitarian than lower cost products, have their place in the world. For example, Tiffany & Co. (NYSE:TIF) is well known for selling silver jewelry and diamond rings (jewelry makes up about 90% of sales). You can get silver and diamond jewelry that looks just as nice as a Tiffany just about anywhere. However, you don’t get to say that it’s a Tiffany.

Indeed, while Tiffany & Co. (NYSE:TIF)’s sales dropped off for two years during the deep 2007 to 2009 recession, the top line has, overall, shown impressive growth over the past decade. This for a company that only sells through its 275 company-owned stores. Clearly, being able to show off a Tiffany product has real value to a select group of customers.

That is one of the key facts that makes Tiffany, with a long history of annual dividend increases and a still growing store base, a long-term buy. It is also one of the things that may make Tesla a good investment, too.