The market is supposed to change supply to meet changes in demand, yet the oil market appears to be breaking the mold. The price of oil and the number of drilling rigs has skyrocketed, yet oil production has only increased by a small amount. If you want to safeguard your energy investments you need to recognize the difficulties that the energy market is going through, and the lack of straightforward solutions. 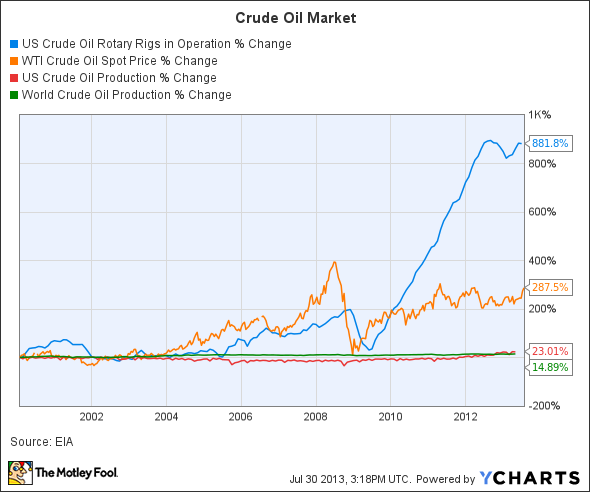 US Crude Oil Rotary Rigs in Operation data by YCharts

It is very unlikely that the world will physically run out of oil, but there is a good chance it will run out of cost effective oil fields. Data from the Energy Information Agency shows that cost of drilling new wells has skyrocketed in recent years. Larger oil companies still enjoy profits from older fields, but as they replace their reserves and bring new fields online, their margins are under pressure.

While alternative fuels like algae based biodiesel have to wait years before they will be profitable, there are other ways that people are dealing with increasing oil exploration costs. Some investors have decided to pony on the Tesla Motors Inc (NASDAQ:TSLA) train. Rising sales of its electric cars and a growing network of charging stations are making the company a hot growth story.

The luxury vehicle market is alive and well, but that doesn’t mean that the company should be trading at a price to book (P/B) ratio around 92 and a price to sales (P/S) ratio around 16. In comparison, GM offers hybrids and traditional cars. It trades at a P/S ratio around 0.33 and a P/B ratio around 1.8. Also, Tesla Motors Inc (NASDAQ:TSLA)’s balance sheet is questionable with a total debt to equity ratio of 2.7.

Outgrowing Oil Is Not Easy

BP plc (ADR) (NYSE:BP) is a major British petroleum firm that has dabbled in green energy. The problem is that these assets have not proven to be very profitable. It has been hard to for the company justify substantial investments in renewables when it is able to able to generate a return on investment (ROI) of 13.6% from a mainly petroleum based portfolio. After BP plc (ADR) (NYSE:BP) sold its solar assets, it recently announced it is going to sell billions of dollars in wind assets.