I’ve done very well by Elon Musk, at least in the past few months. But is it coming to an end?

Tesla Motors Inc (NASDAQ:TSLA) and SolarCity Corp (NASDAQ:SCTY) both have prominent places in my portfolio, and unless you’ve been living under a rock this month, you know how that’s turned out for me, and I hope for you, too. For those not taking score at home: 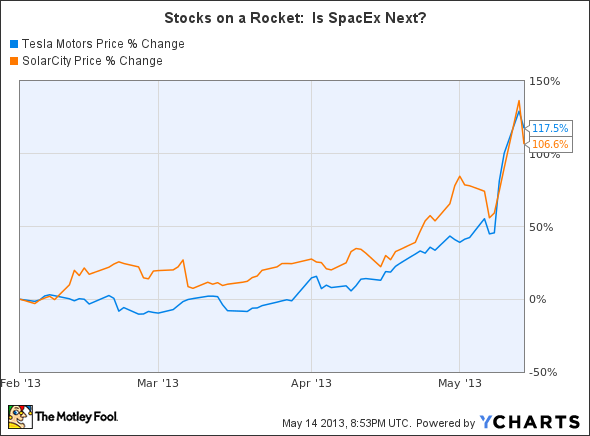 The amazing run-up that we’ve seen in the past couple of weeks didn’t just start overnight. The chart above shows how I’ve personally been rewarded: I added shares of both of these companies to my IRA in both February and March, and Mister Market has given me returns that I would have been happy to see over the next four or five years.

Time to take those profits?

There’s very little doubt in my mind that both companies are probably overpriced today, and I think the market is seeing the same thing: Both were down at market close on May 14, to the tune of 5% for Tesla Motors Inc (NASDAQ:TSLA), and nearly 13% for Solar City. But even with today’s loss, the market is still valuing these two “Energy Future” players pretty high: To the tune of $2.4 billion for SolarCity Corp (NASDAQ:SCTY), and closer to $9.6 billion for Tesla.

And considering that Tesla Motors Inc (NASDAQ:TSLA) generated just over $560 million dollars in revenue for the quarter (after having only generated around $30 million a year ago) in essentially its first three months selling it’s first fully ground-up product, this is a pretty optimistic outlook by Mister Market. He’s even more pie-in-the-sky on SolarCity Corp (NASDAQ:SCTY): It just reached the $30 million dollar revenue mark this quarter.

From a valuation perspective, that means Tesla Motors Inc (NASDAQ:TSLA) is carrying a Price-to-Sales ratio, or P/S, of 5.44, while SolarCity Corp (NASDAQ:SCTY)’s P/S ratio is a stratospheric 14. Here’s some context: Tech retail darling Amazon.com, Inc. (NASDAQ:AMZN) is widely panned as being overvalued to the extreme. Amazon’s P/S ratio? Around 1.6. Oh, and in case you don’t know, the lower the P/S number, the more cheaply valued a company’s stock is.

Not for me, and for a couple of reasons. First, I didn’t buy either of these companies with the end-game being today’s share price. Don’t get me wrong. It’s very tempting to sell, especially considering that I hold almost all of my shares of both in a tax-advantaged account, which would eliminate any capital gains (this year, at least). I’m invested in both of these companies for what they are trying to become, and while the share price has gotten ahead of the businesses, the businesses are performing well.

Besides, and this is the second reason: I’ve had terrible luck trying to “time” the market. I just don’t have any faith in myself in that regard- or maybe a better way to put it- I have zero faith in anyone being able to predict what will happen in the short term with the stock price of either of these companies. But with that said, I’m not adding right now. Lastly, would I open a position in either of these companies today if I wasn’t already heavily invested?

Yes I would. Here’s why:

Rich valuations, but a richer future

As expensive as both companies are today, the future is as bright as the midday sun for both companies. SolarCity Corp (NASDAQ:SCTY) actually has an all-important trait that Warren Buffett insists on for every investment that he’s ever made: Predictable revenue and profit streams. Every new contract brings in incremental revenues for a period measured in decades, not just years. Musk has often described it as a “massive, decentralized utility,” and as we all know, utilities are pretty good at generating incredibly predictable revenue and income streams.

Tesla Motors Inc (NASDAQ:TSLA), on the other hand, has found a different secret sauce, a la Apple Inc. (NASDAQ:AAPL). If you build something amazing, people will buy it, even if it’s more expensive than “comparable” products.The simple fact is that nearly every reviewer of the Model S has lauded the car with praise, and most have gone out of their way to stress that it’s an amazing car- it just so happens to be electric.