I’m a big fan of Tesla Motors Inc (NASDAQ:TSLA). While massive global automakers like General Motors Company (NYSE:GM) and Nissan have been forced to cut prices on their electric vehicles to move them off dealer lots, Tesla can’t produce enough of its Model S luxury sedan to meet demand. Back in February, I wrote that Tesla was “primed for profit” in 2013, and I recommended the stock as an attractive growth investment.

However, when I wrote that article, you could buy Tesla Motors Inc (NASDAQ:TSLA) stock for less than $40. As of Wednesday’s close, Tesla’s stock price had soared to nearly $140, after peaking at $158.88 last week. 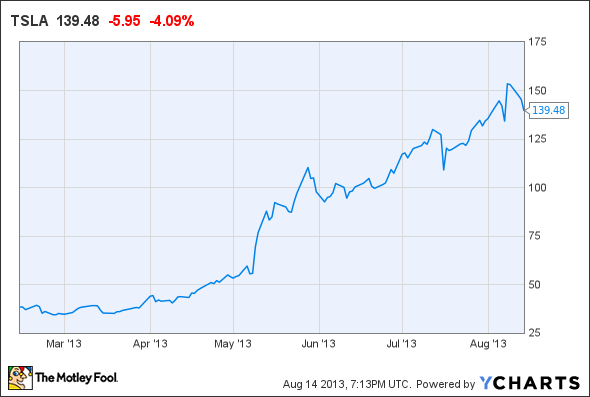 With Tesla Motors Inc (NASDAQ:TSLA) stock having nearly quadrupled in the last four months, there’s no margin of safety left for potential investors. As a result, I cannot recommend buying the stock at this point. In fact, if the stock goes any higher, I will seriously consider shorting Tesla. The company’s valuation has started to move beyond a level consistent with its likely prospects.

While I’m pessimistic about Tesla Motors Inc (NASDAQ:TSLA) stock’s prospects, the company itself is performing very well. Last quarter, Tesla produced a surprise non-GAAP profit of $26 million and sold a record 5,150 Model S sedans in North America. Automotive gross margin (excluding ZEV regulatory credits) has improved by 17 percentage points over the last two quarters. Tesla is well on the way to its goal of achieving a 25% automotive gross margin by year’s end. Increases in volume, logistics improvements, and part redesigns all contributed to the improvement.

Sales are expected to continue growing rapidly. Tesla Motors Inc (NASDAQ:TSLA) is just starting to deliver cars in Europe, and it will make a big push into Asia later this year and in 2014. Management believes that this will allow Tesla to ramp up Model S production to an annualized rate of at least 40,000 by the end of 2014. At that point, Tesla is expected to begin building its second mass-production vehicle, the Model X crossover, leading to further sales growth.

As impressive as this sales growth is, analysts expect Tesla to earn revenue of just under $3 billion next year, whereas its market cap is more than $16 billion and peaked around $19 billion last week. At those prices, investors should be asking how much Tesla can realistically be expected to earn in the future.

Model S revenue per vehicle has been a little over $100,000 so far, primarily due to the popularity of higher-end packages, even though the starting price is less than $70,000. However, Tesla’s average selling price is likely to decline significantly over time.

First, as component costs decline, Tesla will probably have to pass some of the savings along to customers. These price cuts would offset the expiration of regulatory credits such as the $7,500 federal tax credit for Model S buyers. (This credit will phase out later this decade when Tesla hits 200,000 cumulative vehicles sold in the U.S.)

Second, as Tesla saturates the market of wealthy enthusiasts, the mix of Model S (and Model X) sedans will shift toward the lower-priced variants. Third, Tesla plans to introduce a $35,000 vehicle for the mass market later this decade. Due to the lower price point, this model would almost certainly be Tesla’s top seller by a wide margin. Combined, these factors could push Tesla’s average selling price from over $100,000 today to $50,000 or less by the end of the decade.

There are two key questions for Tesla investors. First, how large is the addressable market for electric vehicles at a $35,000 price point? Second, what level of gross margin could Tesla achieve for a car at this price? Both answers could be somewhat unsettling for Tesla investors.