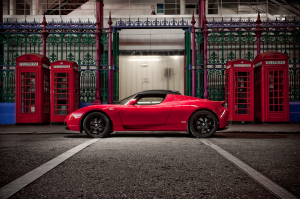 Tesla Motors Inc (NASDAQ:TSLA) is a stock that many people — including quite a few professional investors — love to hate.

Whether it’s because of the politics of electric cars, because billionaire CEO Elon Musk’s brash and snarky manner, or simply because its valuation sparks comparisons to the wilder stocks of the old dot-com bubble era, plenty of folks either don’t want Tesla Motors Inc (NASDAQ:TSLA) to succeed, or just honestly don’t believe that it can.

Many of those folks have put their money where their ideas are, by investing in a short position in Tesla Motors Inc (NASDAQ:TSLA)’s stock.

And at least this week, a lot of those folks got burned in a big way. Here’s what happened.

How a short position lets investors bet against a stock
First, let’s explain. When investors take a short position, what they’re doing is borrowing someone else’s stock and selling it, betting that they can buy it back later (to repay the loan) at a lower price.

If investors think that a company’s stock is overpriced, they can ask their broker to set up a short position that will give them a profit when the stock price falls. The farther it falls, the bigger the profit.

If the stock skyrockets, the investor can lose a lot of money — far more than the original investment. And the longer that person waits to close their position, the more interest he or she has to pay.

In other words, selling a stock short is a risky move. That’s why smart investors save it for cases when they think a stock is wildly overvalued, where its price is so high that it doesn’t seem to make sense.

Where it seems like a sure thing to crash, in other words.

From this perspective, Tesla looked like a classic short candidate
There’s a case to be made for Tesla, but it’s the case against Tesla Motors Inc (NASDAQ:TSLA) that we’re interested in right now. It’s easy to sum up: Here’s a company that has been around for a decade but hadn’t had a quarterly profit ever until this past week. It’s selling a new kind of product — electric luxury cars — that competes against massive global companies, and it’s unclear that enough consumers want that new kind of product to make the business worthwhile.