Tesla Motors Inc (NASDAQ:TSLA) has been on a tear since the company’s CEO announced it would turn a profit in the first quarter. Going from spending on growth to making money is an important transition point in a company’s life. However, the decision to stop providing backlog data should concern investors.

Very often a company turning its first profit is the first indication of long-term earnings growth. So, investors have justifiably been impressed with Tesla Motors Inc (NASDAQ:TSLA)’s first quarter. The shares have advanced over 170% so far this year, with most of the increase coming after the CEO’s earnings pre-announcement. 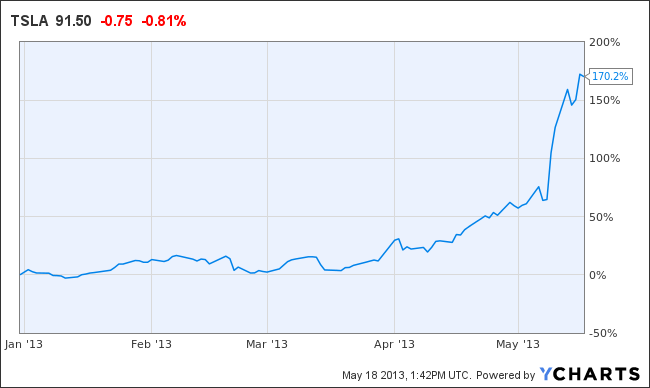 Since the company still lost money over the trailing 12 months, however, it still hard to place a valuation on the company’s shares. In fact, the trailing twelve month loss is almost $2.70 a share, which makes the dime it earned in the first quarter look kind of small.

Even if the company earns $0.10 in each of the next three quarters, its recent price of around $90 would leave it with a P/E over 200. Ford Motor Company (NYSE:F)’s P/E is about 10 and General Motors Company (NYSE:GM)’s is about 9. Tesla Motors Inc (NASDAQ:TSLA) would need to earn over $4 a share to have a P/E of around 20. Clearly, Tesla Motors Inc (NASDAQ:TSLA) is being priced on emotion and not numbers right now.

Grey Clouds on that Silver Lining

Electric cars may be a great product, but they aren’t mainstream yet. Tesla has found a niche only on the high end. In fact, the company’s sedan was to be built in two versions–a luxury model costing nearly $100,000 and a lower cost model with less range. The lower cost model, which was still expensive at around $60,000, got dropped because of a lack of demand.

While there may be plenty of room for high-end cars to support profitability, the company needs to figure out how to make and sell lower priced models if it wants to survive over the long term. One key metric for the company and investors has been Tesla’s backlog, or the number of reservations it has. It just stopped reporting that number.