Tesco PLC (TSCO) or Wm. Morrison Supermarkets plc (MRW)? Which One To Buy

LONDON — The U.K.’s supermarket chains have become popular investments with income and value seekers in recent years, thanks to their modest valuations and attractive dividend yields.

However, although these retail giants are attractive investments, they aren’t without their own challenges, so in this article I am going to compare Tesco PLC (LON:TSCO) and Wm. Morrison Supermarkets plc (LON:MRW) to see which looks the better buy today.

Tesco vs. Morrisons
I’m going to start with a look at a few key statistics that can be used to provide a quick comparison of these two companies, based on their last published results and current share prices:

Tesco PLC (LON:TSCO)’s P/E ratio of 21.1 reflects the restructuring costs and impairments it has accounted for in this year’s results. Excluding these, and focusing on Tesco’s preferred measure of underlying profit from continuing operations, Tesco has a trailing P/E of 10.1, almost the same as Wm. Morrison Supermarkets plc (LON:MRW)’s. 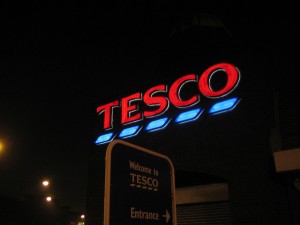 The companies’ operating margins also tell an interesting story. If you look in Tesco’s results, it claims an overall trading margin of 5.3%, which is almost identical to Wm. Morrison Supermarkets plc (LON:MRW)’s.

However, Tesco PLC (LON:TSCO) prefers to report its trading margin excluding the accounting cost of its Clubcard loyalty program, which was 572 million pounds last year. Once you factor this cost in, Tesco’s operating margin falls to just 3.4%, which shows how its generous use of discount vouchers is having a significant impact on its profitability.

What’s next?
Are the trends we identified above about to change, or should we expect more of the same?

Analysts’ forecasts are notoriously unreliable, but FTSE 100 companies generally get the benefit of the most comprehensive analysis and tend to deliver fewer surprises than smaller companies.

With that in mind, let’s take a look at some forward-looking numbers for Tesco PLC (LON:TSCO) and Morrisons. These apply to the companies’ 2013/14 financial years:

These figures, which are based on the companies’ guidance figures and analysts’ forecasts, exclude any further restructuring costs for Tesco PLC (LON:TSCO). Wm. Morrison Supermarkets plc (LON:MRW)’s dividend is expected to grow by twice as much as Tesco’s, but both firms currently offer a similar forecast dividend yield.

Finally, earnings per share are expected to shrink slightly for both companies, probably as a result of falling profit margins and rising costs, rather than falling sales.

Related Insider Monkey Articles
Tesco PLC (TSCO): Is This Stock Back on the Rise?