Terex Corporation (TEX), Caterpillar Inc. (CAT), Deere & Company (DE): Is The Game Over For This Stock?

This stock has rallied more than 8% since the last time I wrote on it, even etching a new 52-week high for itself some days back. That last time wasn’t that long ago though, just a month. I had a hunch then that this one could rocket. It did.

The reasons I laid down still hold good for Terex Corporation (NYSE:TEX). Does that mean the stock has just embarked on a fresh rally? Or is it time to take some profits off the table?

Down, but not out

Every time a stock hits a new high, the first question that pops in my mind is whether the upswing is justified. For that, I usually go back and see how the company fared over the relevant time frame, because prudently, a well-performing company should see its stock price moving up. Terex’s performance metrics over the past twelve months present an unusually interesting picture. 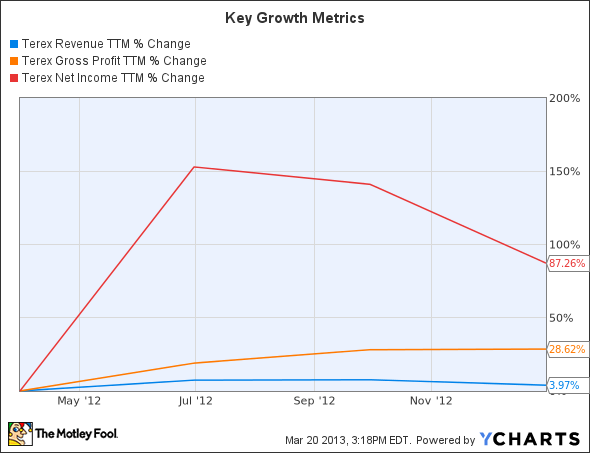 The company’s revenue grew a meager 4%, but just look at the way its profits expanded! Gross profit improved a good 29% while net income surged a handsome 87% in the past one year. That’s the surest indication of how well Terex Corporation (NYSE:TEX)’s management has tamed costs – the best it could do in what was otherwise a pretty slow year for companies in the construction sector. In my previous post, I had mentioned another reason why I think so highly of the way Terex has expanded its gross margin – it is the only company in its immediate peer group that doesn’t run a parallel business. For example, Caterpillar Inc. (NYSE:CAT) earned a greater part of profits from mining business last year, while Deere & Company (NYSE:DE) raked in most of the money from its farm-equipment business.

I personally like companies that can convert incremental revenue into income. But the real question is – Is Terex as good when stacked against peers? Not quite. Take a look.

Terex Corporation (NYSE:TEX)’s is a relatively sad story. Its margins don’t quite match up to rivals. Caterpillar Inc. (NYSE:CAT) and Deere & Company (NYSE:DE) sweep the board with good revenue growth and best margins. Manitowoc’s revenue growth lags behind Terex’s, but great cost control has helped it push margins even though its foodservice equipment is yet to show its true colors. Oshkosh has had to battle too many headwinds behind its defense business which took a toll on its top and bottom lines.

The only area where Terex outstrips peers is on a reasonably lower debt burden. Terex put in extra effort last year to pare down debt, results of which show up on its improved financials. More important, the crane maker made $106 million in net profit last year, but generated double the amount as free cash flow. That is certainly something you don’t get to see too often. I’d give Terex a brownie point here.

Interestingly though, despite being a slow performer, Terex currently commands the highest valuations among peers. The table will give you a clear picture.

At 39 times earnings, Terex Corporation (NYSE:TEX) is steeply priced. Throw in an expected growth rate of just 10% over the next five years with no dividends to match up, and the excitement around Terex fizzles. With lowest P/Es and tidy dividend yields, Caterpillar Inc. (NYSE:CAT) and Deere win this game as well, though Caterpillar’s lower debt may make it a better bargain. Manitowoc appears expensive on both P/E and price-to-cash-flow terms, and Oshkosh might offer better returns at current price. Oshkosh even upgraded its full-year guidance recently.