Today, I’ll focus on three other ways to play the housing boom via another industry — beds and furniture — which will remain in high demand as home sales rise.

A tale of foam and coils

Tempur-Pedic International completed the acquisition of its rival, Sealy Corporation (NYSE:ZZ), back in March for $1.3 billion, creating the largest publicly traded mattress and pillow maker in the country — Tempur Sealy International Inc (NYSE:TPX).

For several years, Tempur-Pedic held a niche market in foam mattresses, which are based on NASA technology. However, in recent years, Tempur-Pedic has lost that niche to privately held rivals Simmons Bedding and Serta, which also started producing foam mattresses. This battle has also led to margin-crushing price reductions across the industry. Last April, Tempur-Pedic stock plunged nearly 50% in a single day after the company gave a bleak full-year forecast that revealed that its market share was shrinking at a faster-than-expected rate. 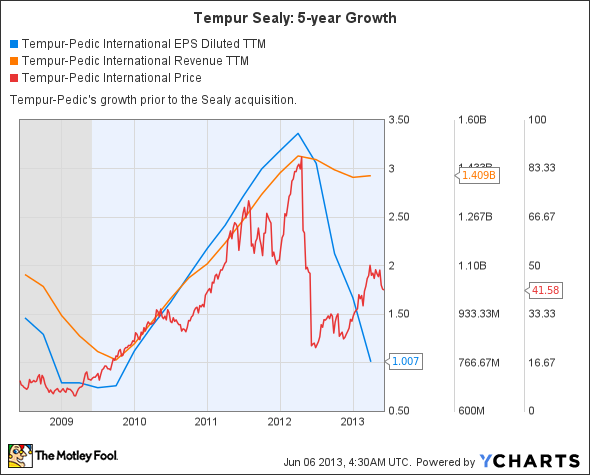 To spur growth again, Tempur-Pedic acquired Sealy, which had been struggling to survive for the past six years. Sealy, which owns the Posturepedic and Stearns & Foster brands, manufacturers traditional spring coil beds, which complemented Tempur-Pedic’s foam mattresses. Although merged, the two companies still operate independently with two CEOs – Larry Rogers at Sealy and Mark Sarvary at Tempur-Pedic.

Although Tempur Sealy International Inc (NYSE:TPX)’s earnings aren’t particularly impressive, they show that the company has managed to stop the bleeding that nearly sank the company last year. Acquiring Sealy was a good move that allowed it to diversify its product line and grow its top line again. Considering that the stock is still down nearly 4% over the past twelve months but is trading at 12.4 times forward earnings with a five-year PEG ratio of 1.2, I think that this stock could slowly recover as demand for new beds rises along with the housing market.

Tuck your cash under this mattress