Tempur Pedic Wakes Up Hung Over

Tempur-Pedic International Inc. (NYSE:TPX) is down about 20% today after the company reduced its guidance for 2012 earnings per share from $2.80- which had been essentially in line with analyst consensus- to $2.55. Given that the company reported $1.31 in earnings per share for the first half of the year in its 10-Q for the second quarter, this means that its internal expectations of EPS for the second half of the year have dropped from $1.49 to $1.24- a 17% decrease, essentially in line with the stock’s reaction to the news. Tempur-Pedic, which is planning to close its acquisition of fellow mattress company Sealy Corporation (NYSE:ZZ) next year, is now down 53% year to date after peaking in mid-April (which capped a roughly 1,000% gain from the beginning of April 2009).

The second quarter of the year saw a modest decline in Tempur-Pedic’s sales, with revenue falling 4% compared to the same period a year earlier. However, costs were up- cost of sales, selling and marketing expenses, and general and administrative expenses all came in higher in absolute figures- pulling net income down by 45%. Even with significant buybacks- which clearly did not pay off for the company- earnings per share for the quarter were only 45 cents versus 76 cents in the second quarter of 2011. At a market capitalization of $1.5 billion, Tempur-Pedic International Inc. trades at a P/E of 8 on either a trailing or a forward basis. We’re certainly concerned about its recent poor performance, but if it can even slow the decline for a while it may turn out to be a good value stock to buy in a few months.

John Shapiro’s value investing fund Chieftain Capital had Tempur-Pedic International Inc. as one of the five largest holdings in its 13F portfolio at the end of June. Chieftain had increased its stake by 61% to a total of 6.3 million shares at that time (find more stocks that Chieftain owned). Nantahala Capital Management, managed by Wilmot Harkey and Daniel Mack, and Patrick Degorce’s Theleme Partners also liked the stock during the second quarter: their 13F filings reported purchases of shares that brought their holdings to 630,000 and 1.9 million shares, respectively. See more stocks that Nantahala and Theleme Partners reported owning. It is of course possible that these funds had reduced their positions in the stock during the third quarter or over the course of this month.

Sealy is unprofitable on a trailing basis, and even its EV/EBITDA multiple of 7.7x (likely bid up by Tempur-Pedic, which has a multiple of only 7.0x) doesn’t strike as appealing from a value perspective. It currently trades at 20 times analyst estimates for what it would earn as an independent company in the next fiscal year (which would end in November). We suppose it’s good for the value thesis that Tempur-Pedic is expanding, even if it may be overpaying a bit, the question is just whether or not the mattress business is attractive in the first place.

Mattress companies Select Comfort Corp. (NASDAQ:SCSS) and Mattress Firm Holding Corp (NASDAQ:MFRM), along with comfort furniture company La-Z-Boy Incorporated (NYSE:LZB) are also peers for Tempur-Pedic. All three of these companies carry trailing P/Es of 19- a very large premium to where Tempur-Pedic is currently trading- and their forward P/E multiples are in the teens as well. The mattress focused companies, however, have experienced strong growth: in their most recent quarters, Select Comfort and Mattress Firm Holding grew their revenues by 24% and 46% compared to the same period in the previous year, respectively, with earnings growth being about twice as high in both cases due to higher margins. If even moderate growth can continue, we’d actually like these companies better than the struggling Tempur-Pedic. La-Z-Boy saw small top-line growth but lower margins almost wiped out net income. We’re not sure that it should be in the same multiples range as these other two companies.

Tempur-Pedic looks like a value stock on an earnings basis, but we’re worried that even its acquisition won’t help it stabilize its business. It’s tough to pass up, and we’d keep an eye on over the next several months, but the higher-priced mattress companies look like better buys as they deliver good performance.

Bed Bath & Beyond (BBBY): These Hedge Funds Got Burned Again

Is Jack in the Box a Great Idea?

This Famed Value Investor is Buying More Tempur-Pedic, Should You? 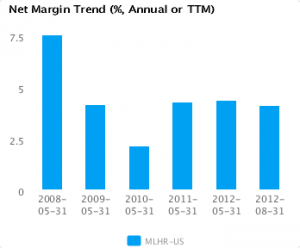 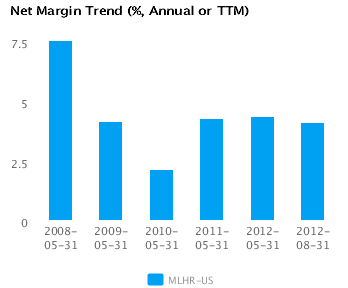