Could this deal enable Telefonica S.A. (ADR) (NYSE:TEF) to make up for its gloomy five-year revenue growth or should you just steer clear of this beaten-down stock? 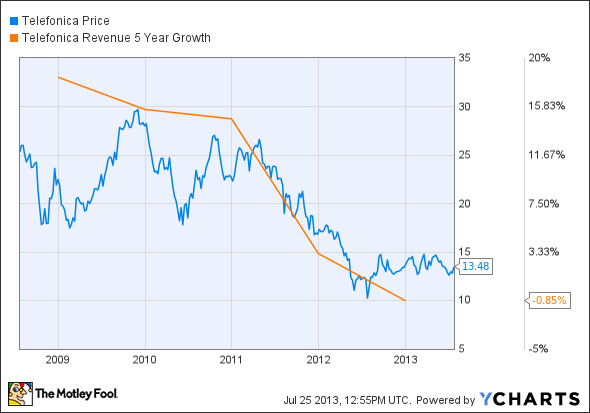 Telefonica Deutschland (Telefonica S.A. (ADR) (NYSE:TEF)’s arm in Germany) is buying the Dutch telecom’s German mobile business (E-Plus) in a deal that includes a two-face investment process. Eventually, the Spanish juggernaut will take up a 65% stake in the combined entity while KPN will get a 17.6 % share plus €5 billion (nearly $6.6 billion) in cash. The rest will be left as free float.

The two telecoms have yet to get the go-ahead from EU regulators, as well as KPN’s shareholders. Telefonica S.A. (ADR) (NYSE:TEF) expects the whole process to be concluded in mid-2014. If KPN’s shareholders back down they’ll have to pay a €50 million ($66 million) breakup fee.

Overall, the merger is expected to generate synergies in the range of €5billion to €5.5 billion excluding integration costs while combined annual revenue is estimated to reach €8.6 billion (over $11 billion).

Over the past year, Telefónica has been unloading non-core operations trying to get its finances in the black. But, in this case it’s going “all in.” Telefonica first set foot into the German market in 2006, when it bought UK operator O2. With this new deal, it’s aiming at getting a firm grip on Europe’s biggest mobile market.

Based on the German Federal Network Agency’s latest figures, E-Plus has more than 23 million customers, and O2 counts 19.3 million clients. At the moment, British operator Vodafone Group Plc (ADR) (NASDAQ:VOD) and T-Mobile (Deutsche Telekom’s subsidiary) claim the lion’s share with 36.6 million and 33.9 million customers, respectively. The coming together of E-Plus and Telefonica Deutschland will create Germany’s largest mobile operator with a 43 million customer base that translates into a nearly 40% market share.

Consequently, there will be primarily three rivals shaping the country’s telecommunications services landscape and making Germany the least competitive market among the big five markets in Europe. So, antitrust regulators might have second thoughts about giving the green light. Nevertheless, if the deal is pulled off, the less competitive environment could leave some elbow room for sneaky price hikes, provided that these price hikes don’t tick regulators off.

Will Telefonica cash in on this deal?

Let’s say Telefonica brings antitrust regulators around and eventually becomes the No 1 operator in Germany. Does this mean that the company is set for a rally?