Investing in small cap stocks has historically been a way to outperform the market, as small cap companies typically grow faster on average than the blue chips. That outperformance comes with a price, however, as there are occasional periods of higher volatility. The one and a half month time period since the end of the third quarter is one of those periods, as the Russell 2000 ETF (IWM) has underperformed the larger S&P 500 ETF (SPY) by about 4 percentage points. Given that the funds we track tend to have a disproportionate amount of their portfolios in smaller cap stocks, they have seen some volatility in their portfolios too. Actually their moves are potentially one of the factors that contributed to this volatility. In this article, we use our extensive database of hedge fund holdings to find out what the smart money thinks of Tech Data Corp (NASDAQ:TECD).

Tech Data Corp (NASDAQ:TECD) has experienced an increase in activity from the world’s largest hedge funds in recent months. TECD was in 20 hedge funds’ portfolios at the end of September. There were 17 hedge funds in our database with TECD positions at the end of the previous quarter. Our calculations also showed that TECD isn’t among the 30 most popular stocks among hedge funds.

To most traders, hedge funds are assumed to be worthless, old investment vehicles of years past. While there are more than 8,000 funds with their doors open at present, Our researchers choose to focus on the elite of this club, around 700 funds. Most estimates calculate that this group of people orchestrate the majority of the smart money’s total asset base, and by tailing their top picks, Insider Monkey has unearthed numerous investment strategies that have historically surpassed the broader indices. Insider Monkey’s flagship hedge fund strategy outperformed the S&P 500 index by 6 percentage points a year since its inception in May 2014 through early November 2018. We were able to generate large returns even by identifying short candidates. Our portfolio of short stocks lost 24% since February 2017 (through December 3rd) even though the market was up nearly 23% during the same period. We just shared a list of 11 short targets in our latest quarterly update.

Heading into the fourth quarter of 2018, a total of 20 of the hedge funds tracked by Insider Monkey were long this stock, a change of 18% from the second quarter of 2018. The graph below displays the number of hedge funds with bullish position in TECD over the last 13 quarters. With the smart money’s capital changing hands, there exists a few notable hedge fund managers who were boosting their holdings considerably (or already accumulated large positions). 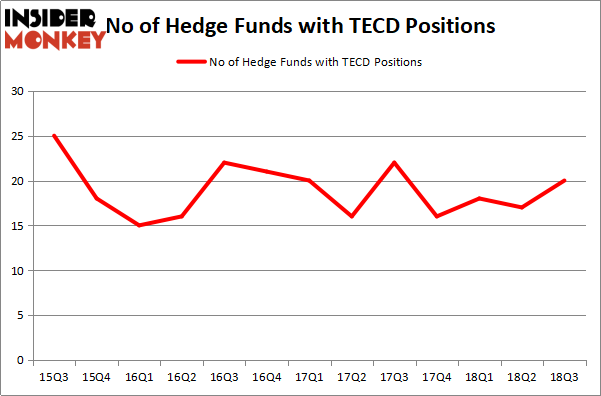 Among these funds, AQR Capital Management held the most valuable stake in Tech Data Corp (NASDAQ:TECD), which was worth $107.3 million at the end of the third quarter. On the second spot was GLG Partners which amassed $13.7 million worth of shares. Moreover, Blue Mountain Capital, Engine Capital, and Ascend Capital were also bullish on Tech Data Corp (NASDAQ:TECD), allocating a large percentage of their portfolios to this stock.

As you can see these stocks had an average of 23.5 hedge funds with bullish positions and the average amount invested in these stocks was $367 million. That figure was $172 million in TECD’s case. argenx SE (NASDAQ:ARGX) is the most popular stock in this table. On the other hand Switch, Inc. (NYSE:SWCH) is the least popular one with only 12 bullish hedge fund positions. Tech Data Corp (NASDAQ:TECD) is not the least popular stock in this group but hedge fund interest is still below average. This is a slightly negative signal and we’d rather spend our time researching stocks that hedge funds are piling on. In this regard ARGX might be a better candidate to consider a long position.

Charles River Laboratories International Inc. (CRL): Are Hedge Funds Right...
Monthly Newsletter Strategy
Download a free copy of our newsletter and see the details inside!
Hedge Fund Resource Center
Related News
Hedge Funds Are Jumping Back Into Tech Data Corp (TECD) Here’s Why Novavax Inc. (NVAX), United States Steel Corporation (X) and Three Other Stocks Are Gaining Ground on Monday Kerrisdale Capital Betting On A Turnaround With 5 New Tech Positions What the Insider Selling at these Companies Could Tell Investors About Their Future Here Is What Hedge Funds Think About Tech Data Corp (TECD) 4 Stocks Feeling The Heat From Downgrades, Weak Earnings Are These Insiders Giving Away Valuable Short-Selling Trading Ideas? 11 Countries With The Worst Modern Music In The World The Top 5 Robo Advisor Apps of 2018 Five Reasons You Need a Day-Trading Mentor
Billionaire Hedge Funds