We at Insider Monkey have gone over 700 13F filings that hedge funds and prominent investors are required to file by the SEC. The 13F filings show the funds’ and investors’ portfolio positions as of September 30th. In this article we look at what those investors think of Taylor Morrison Home Corp (NYSE:TMHC).

Hedge fund interest in Taylor Morrison Home Corp (NYSE:TMHC) shares was flat at the end of last quarter. This is usually a negative indicator. The level and the change in hedge fund popularity aren’t the only variables you need to analyze to decipher hedge funds’ perspectives. A stock may witness a boost in popularity but it may still be less popular than similarly priced stocks. That’s why at the end of this article we will examine companies such as TopBuild Corp (NYSE:BLD), Advanced Energy Industries, Inc. (NASDAQ:AEIS), and Evoqua Water Technologies Corp. (NYSE:AQUA) to gather more data points.

How have hedgies been trading Taylor Morrison Home Corp (NYSE:TMHC)?

At the end of the third quarter, a total of 21 of the hedge funds tracked by Insider Monkey were bullish on this stock, representing no change from the previous quarter. The graph below displays the number of hedge funds with bullish position in TMHC over the last 13 quarters. With hedgies’ capital changing hands, there exists an “upper tier” of noteworthy hedge fund managers who were adding to their holdings significantly (or already accumulated large positions). 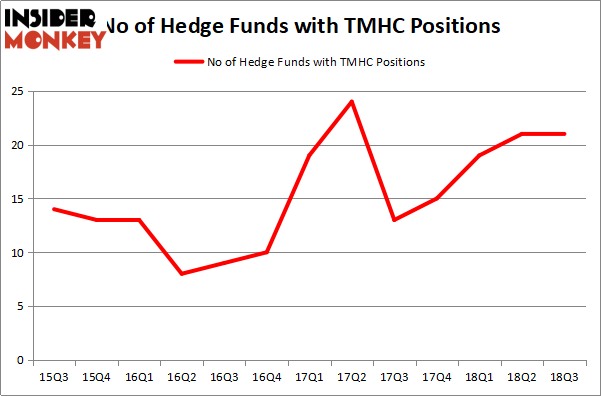 Judging by the fact that Taylor Morrison Home Corp (NYSE:TMHC) has faced falling interest from hedge fund managers, we can see that there exists a select few hedgies that slashed their positions entirely last quarter. It’s worth mentioning that Leon Cooperman’s Omega Advisors cut the largest position of the 700 funds watched by Insider Monkey, valued at an estimated $15.6 million in stock. Glenn Russell Dubin’s fund, Highbridge Capital Management, also said goodbye to its stock, about $1.6 million worth. These transactions are important to note, as total hedge fund interest stayed the same (this is a bearish signal in our experience).

As you can see these stocks had an average of 14.75 hedge funds with bullish positions and the average amount invested in these stocks was $124 million. That figure was $399 million in TMHC’s case. Advanced Energy Industries, Inc. (NASDAQ:AEIS) is the most popular stock in this table. On the other hand Evoqua Water Technologies Corp. (NYSE:AQUA) is the least popular one with only 11 bullish hedge fund positions. Compared to these stocks Taylor Morrison Home Corp (NYSE:TMHC) is more popular among hedge funds. Considering that hedge funds are fond of this stock in relation to its market cap peers, it may be a good idea to analyze it in detail and potentially include it in your portfolio.