Target Corporation (NYSE:TGT) operates general merchandise stores in the United States. Target is a dividend champion, which has paid dividends since 1965 and raised them every year for 48 years in a row.

The most recent dividend increase was in June 2015, when the Board of Directors approved a 7.70% increase in the quarterly dividend to 56 cents/share.

Among the hedge funds tracked by Insider Monkey, 34 investors reported long positions in Target Corporation worth $1.10 billion in aggregate as of the end of March, down from 38 funds holding $1.29 billion worth of shares a quarter earlier. These funds held around 2.20% of Target’s outstanding stock. Principal Global Investors’ Columbus Circle Investors owns 2.36 million shares of Target Corporation as of the end of March.

Over the past decade this dividend growth stock has delivered an annualized total return of 6.30% to its shareholders. Future returns will be dependent on growth in earnings and dividend yields obtained by shareholders. 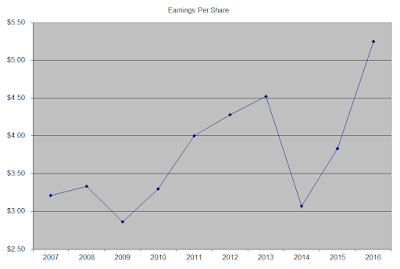 Between 2005 and 2016, the number of shares outstanding has decreased from 912 million to 633 million. The decrease in shares outstanding through consistent share buybacks adds an extra growth kick to earnings per share over time. I do not like the fact that the net income between 2005 and 2016 only increased from $3.198 billion to $3.321 billion.

Growth for Target could be driven by expansion of number of stores in the US, plus growth in same-store sales. The company is also targeting cost cuts, in order to boost margins. However, I am more interested in increasing the number of stores, in order to increase penetration in the US. Relative to the number of Wal-Mart stores in the US, I still believe there could be areas of new store development for Target, as long as this is executed in a smart way of course. Unfortunately, the number of stores has gone nowhere since 2010. In 2010 there were 1490 Target and 250 SuperTarget stores. In 2016, there are 1535 Target, 249 SuperTarget and 8 CityTarget stores. This is a very low growth in number of stores. On the other hand, revenues increased from $65.347 billion in 2010 to $73.785 billion in 2016, while net income increased from $2.488 billion to $3.321 billion over the same time period.

Despite the issues that Target Corporation (NYSE:TGT) experienced with its Canadian expansion in 2013-2015, I think that the company has an opportunity to expand internationally. This is a driver which could propel earnings per share forward for the next 20 years. It has to be executed better than the Canadian store fiasco however.

Another driver for future growth is the CityTarget stores, which are smaller, but provide the option to locate in densely populated areas. Those stores could have better productivity due to higher potential traffic and higher inventory turnover because of that.