Target Corporation (NYSE:TGT) operates general merchandise stores in the United States and Canada. Target is a dividend champion, which has paid dividends since 1965 and raised them every year for 49 years in a row.

The most recent dividend increase was in June 2016, when the Board of Directors approved a 7.10% increase in the quarterly dividend to 60 cents/share.

Over the past decade this dividend growth stock (2) has delivered an annualized total return of 1.60% to its shareholders. Future returns will be dependent on growth in earnings and dividend yields obtained by shareholders. More recently, the stock price has been hammered by a decline in earnings expectations. This is why I wanted to take another look at Target. 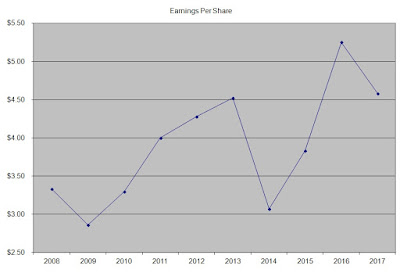 Target Corporation (NYSE:TGT) focuses on affluent consumers with its upscale stores. Its customer base is somewhat different than that of competitor Wal-Mart. Many of Target’s customers enjoy shopping there, and are attracted by the appeal of offerings and overall atmosphere within the stores. Target’s stores are generally more appealing than those of Wal-Mart, and are cleaner. In addition, Target manages to retain shoppers with its RedCard. Shoppers who use the Target Card get a discount, but also tend to spend more than the average purchaser. In addition, the company has been able to drive more traffic with sales of grocery/food items.

What is the competitive advantage of Target? I believe that the company offers a unique shopping experience that competitors like Wal-Mart do not offer. I also believe that Target looks for a certain type of consumer, who does not like the assortment of goods and the experience that Wal-Mart provides, yet still wants to get a bargain. The company has been able to offer fashion chic items, which draw the specific type of shopper they target. The company also offers convenient locations for shoppers, who come to Target for its quality merchandise. I believe that shares could deliver a very good return to investors who are willing to weather near-term turbulence at the company.