Our data culled from the 659 funds in our database which filed 13Fs for the June quarter, and whose portfolios contained at least 5 long positions in companies valued at $1 billion, revealed some startling statistics. Foremost was the fact that an impressive 95% of them delivered positive stock returns with those long positions during the third quarter based on our methodology. In comparison, S&P 500 ETFs returned just 3.3% during the quarter, so that high a percentage of funds posting gains is a noteworthy feat. However, what we don’t see in 13F filings are hedge funds’ holdings that don’t necessarily do as well: the short-side of their portfolios, as well as their low-yield debt positions. Couple that with demanding fees, and you can see why hedge funds consistently underperform the market net of fees, despite being quality stock pickers. That’s why at Insider Monkey, we analyze only the top stock picks of the top hedge funds, to cut through the fees and underperformance. In this article, we’ll take a look at the performance of Justin John Ferayorni‘s Tamarack Capital Management and four of its favorite stocks.

Tamarack Capital’s equity portfolio was valued at $317.91 million on June 30 and consisted of 16 long positions in companies with a market cap of at least $1 billion. Based on the size of those holdings on June 30, those 16 positions delivered weighted average returns of 14% during the third quarter, pushing its year-to-date performance using the same metric to 10.1% gains. It should be noted that our calculations may be different from the fund’s actual returns, as they do not factor in changes to positions during the quarter, or positions that don’t get reported on Form 13Fs, like short positions.

In this article, we’ll take a look at four of the favorite stock picks of Tamarack Capital and see how they performed during the third quarter. As the fund has also now filed its 13F for the September 30 reporting period, we’ll also take a look at how it traded those stocks during the quarter.

First up is NxStage Medical, Inc. (NASDAQ:NXTM), which Tamarack owned 1.2 million shares of at the end of June, valued at $26.01 million. The fund the size of its position in the stock by 29% during the second quarter, taking some profit from the position as shares soared. However, they weren’t done gaining, posting gains of 15.3% during the third quarter, during which time Tamarack trimmed its position by a further 10%, leaving it with 1.08 million shares. 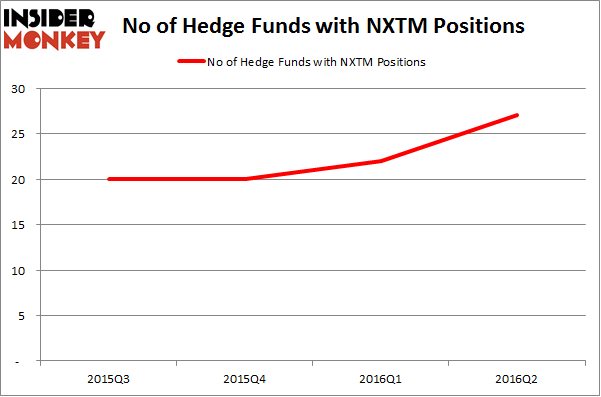 Next up is Ariad Pharmaceuticals, Inc. (NASDAQ:ARIA), in which Tamarack upped its stake by 31% during the second quarter, to 2.1 million shares valued at $15.52 million. Shares of the company returned a stunning 85.3% during the third quarter, which prompted Tamarack to trim its position by 11% to 1.85 million shares. Shares have endured a rough fourth quarter, but are having a great day today, rising by 16%.