The last several years have been rough for American automakers with the recession and the ensuing auto bailout. The most successful one was Ford Motor Company (NYSE:F), which managed to both avoid bankruptcy and a bailout. However, it still struggled quite a bit. Now, though, the tide is looking up with Ford Motor Company (NYSE:F) just posting its strongest monthly sales since before the recession.

Ford’s May in America

Ford‘s U.S. sales grew by 14%, and retail sales grew by 17%. Escape sales were up by 26% and the Fusion by 10%. However, all of these successes were dwarfed by the sales of the F-Series, which were up 31% for the best May sales since 2005 with a total of over 70,000 sales. This is especially positive from an investment perspective because of the higher margins on trucks. As a result, Ford announced a third quarter production of 740,000 vehicles, up 10% from last year. Essentially, Ford Motor Company (NYSE:F) had the strongest May since before the Recession and in doing so surpassed expectations.

Ford may be doing quite well in the United States, but it suffered a loss in Europe and South America. South America is not a significant concern because the decline here was primarily caused by unfavorable exchange rates, including the devaluation of the bolivar. As this changes, its results will likely pick up, and Ford Motor Company (NYSE:F) still expects break-even (or at least almost break-even) results for the year. Ford should be able to handle the temporary drag just fine and should be restored to profitability soon.

Europe is a much larger issue for Ford because the losses are caused more by higher structural costs and the market is three times as large. Part of this is just because of the weak European economy. Thankfully, Ford’s profits in America should be able to carry it through until Europe’s economy recovers. Furthermore, Ford Motor Company (NYSE:F) is moving quite rapidly in its reconstruction with the intent of replicating its success here. There is no reason to believe that it will not be able to do that, and if it does Ford should be able to attain its goal of a growing, profitable Ford Europe by the middle of the decade.

However, Europe and South America’s importance is dwarfed by Asia-Pacific-Africa’s. Here again the news is good. Ford was more profitable than it expected to be, and the reason it only expected break-even results was because it was investing so heavily in future growth. Its current market share is low, only about 3.6% in China, but this was about a percentage point higher than a year ago, and if it can continue to grow this rapidly, they will be able to grab a large amount of the potential growth in China. They also managed to improve their market share in Africa to 3%, again gaining about a percentage point in the last year.

Up until this time, Ford Motor Company (NYSE:F)’s stock price has been in line with some of the other major players in the industry. It has neither outpaced them nor lagged behind them. 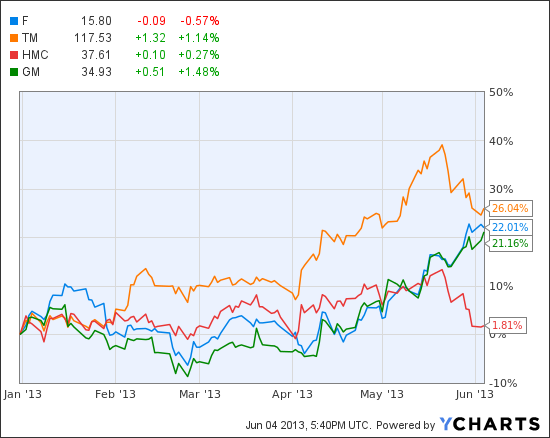 Although, the outlook for the industry as a whole is looking up, many of its competitors are not in as strong a position. General Motors Company (NYSE:GM) had a quarterly profit of $.9 billion, which was lower than a year ago. Furthermore, it is moving much slower at restructuring in Europe than Ford is and is not even trying to increase its market share there. Furthermore, it has a higher P/E ratio, and so Ford is likely the better buy. It is larger in China and so might have more long-term potential though. On the negative side, it has not had any hugely successful cars like the Focus.