Synchrony Financial (SYF): Are Hedge Funds Right About This Stock?

While the market driven by short-term sentiment influenced by uncertainty regarding the future of the interest rate environment in the US, declining oil prices and the trade war with China, many smart money investors are keeping their optimism regarding the current bull run, while still hedging many of their long positions. However, as we know, big investors usually buy stocks with strong fundamentals, which is why we believe we can profit from imitating them. In this article, we are going to take a look at the smart money sentiment surrounding Synchrony Financial (NYSE:SYF).

Is Synchrony Financial (NYSE:SYF) a buy right now? The best stock pickers are getting more bullish. The number of long hedge fund bets moved up by 5 in recent months. Our calculations also showed that syf isn’t among the 30 most popular stocks among hedge funds. SYF was in 35 hedge funds’ portfolios at the end of September. There were 30 hedge funds in our database with SYF positions at the end of the previous quarter.

In the financial world there are many formulas stock traders can use to assess stocks. A couple of the most useful formulas are hedge fund and insider trading indicators. We have shown that, historically, those who follow the best picks of the best investment managers can beat their index-focused peers by a solid amount (see the details here).

At Q3’s end, a total of 35 of the hedge funds tracked by Insider Monkey were long this stock, a change of 17% from the previous quarter. By comparison, 45 hedge funds held shares or bullish call options in SYF heading into this year. With hedge funds’ capital changing hands, there exists an “upper tier” of notable hedge fund managers who were increasing their holdings significantly (or already accumulated large positions). 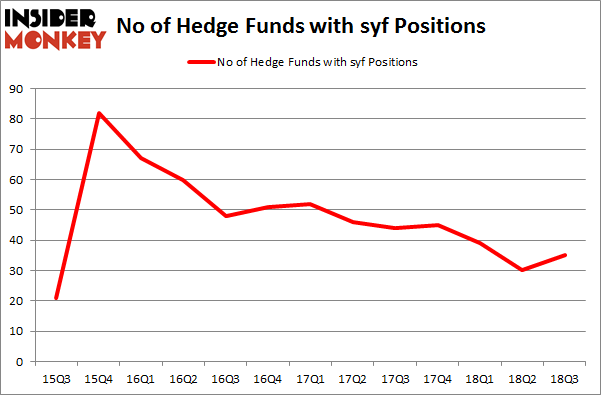 According to Insider Monkey’s hedge fund database, Warren Buffett’s Berkshire Hathaway has the number one position in Synchrony Financial (NYSE:SYF), worth close to $646.6 million, corresponding to 0.3% of its total 13F portfolio. The second most bullish fund manager is Seth Klarman of Baupost Group, with a $507.6 million position; the fund has 3.9% of its 13F portfolio invested in the stock. Some other professional money managers with similar optimism contain Cliff Asness’s AQR Capital Management, Peter Rathjens, Bruce Clarke and John Campbell’s Arrowstreet Capital and D. E. Shaw’s D E Shaw.

As you can see these stocks had an average of 37.25 hedge funds with bullish positions and the average amount invested in these stocks was $1.91 billion. That figure was $2.21 billion in SYF’s case. First Data Corporation (NYSE:FDC) is the most popular stock in this table. On the other hand CenturyLink, Inc. (NYSE:CTL) is the least popular one with only 24 bullish hedge fund positions. Synchrony Financial (NYSE:SYF) is not the least popular stock in this group but hedge fund interest is still below average. This is a slightly negative signal and we’d rather spend our time researching stocks that hedge funds are piling on. In this regard FDC might be a better candidate to consider a long position.

Northern Trust Corporation (NTRS)Hedge Funds Are Snapping Up
Monthly Newsletter Strategy
Download a free copy of our newsletter and see the details inside!
Hedge Fund Resource Center
Related News
4 Stocks Insiders and Warren Buffett Are Crazy About Smart Money’s Sagging Confidence in Synchrony Financial (SYF) Hits A New Low 25 Stocks Billionaires Are Piling On 34 Key Stories That You Should Read To Know How Financial Markets Are Doing Today Why These Billionaire Seth Klarman’s Stock Picks Deserve Your Attention How Synchrony Financial (SYF) Stacks Up Against Its Peers 5 Finance-Related Stocks Hedge Funds Dumped Like Crazy in Q3 The 10 Best Islands to Visit in 2019 5 Most Socially Responsible Companies in America 5 Ways You Can Eliminate Credit Card Debt
Billionaire Hedge Funds