The latest research out of Stanford University states that the solar industry is becoming a net energy producer. Creating solar panels requires a large amount of energy and this latest development is a result of significant improvements in the production process. The recent Suntech bankruptcy is a warning sign that even with industry-wide improvement, not all manufactures and investors are able to benefit.

The energy return on energy invested (EROEI) is an estimate of how much energy is used to create an equal energy unit of output. If a resource is a strong net producer of energy then it is easier for the resource to be profitable for investors and society. Traditional oil fields are a good example. They were easy to find and did not require a large amount of energy to extract. According to a recent paper by the State University of New York, the latest resources like ethanol and the oil sands are very different.

A meta study on the EROEI of ethanol has found that the resource sits just above parity. This means that ethanol is essentially an exchange of energy forms. Energy stored in the form of corn, natural gas, and electricity is put into a refinery and a similar amount of energy in the form of ethanol is the output. The low EROEI greatly affects the economics of ethanol by making profits especially sensitive to volatile corn and natural gas input prices. The massive bankruptcies in the ethanol market show just how vulnerable the industry is. 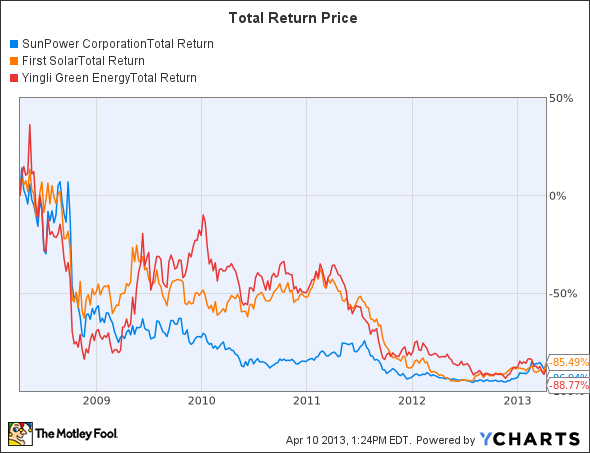 Where does solar stand?

The EROEI for photovoltaics is estimated to be less than that of legacy oil and gas fields, but higher than the oil sands and ethanol. SunPower Corporation (NASDAQ:SPWR) recently released its third-generation Maxeon solar cells in the X-Series panels with a confirmed 21.5% efficiency. These panels are some of the most efficient commercially available panels on the market. They are backed by a 25-year warranty that is one of the strongest in the industry.

Overall SunPower Corporation (NASDAQ:SPWR) is one of the most efficient companies in the industry. It recently won the 2012Photon modal yield test. SunPower’s products are more expensive than government supported Chinese panels, but SunPower’s innovative technology can deliver lower levelized average costs of electricity (LCOE).

As long as the company can deliver systems at a competitive LCOE, it will have a bright future. With a total debt to equity ratio of 0.83 its balance sheet and cash flow need to be watched. Its gross margin of 15.2% and EBIT margin of -10.2% should improve with a number of utility projects still on the horizon. Overall SunPower Corporation (NASDAQ:SPWR) is one of the better manufactures, but it may take some time before the firm’s advanced technology is transformed into profits.

First Solar, Inc. (NASDAQ:FSLR) originally focused on less efficient but cheaper cells. Now the Chinese have won the cost war and First Solar is fighting to regain territory. Currently it plans to break the $0.40/Watt line by 2017 and decrease its LCOE to around $0.16 to $0.09 by 2016. Thankfully the company benefits from the U.S. tariffs on Chinese panels. Still, outside of America First Solar, Inc. (NASDAQ:FSLR) is stuck dealing with lower cost Chinese competitors.

One the positive side the company has a low total debt to equity ratio of 0.16. Its high gross margin of 33.1% is partially driven by its legacy contracts. In the next couple years its EBIT margin of -0.8% should return to healthier levels as it is expected to earn $3.68 per share in 2014. The next decade should be challenging as the firm’s cells are less efficient than its competitors and this will drive up the LCOE costs for customers.

Yingli Green Energy Hold. Co. Ltd. (ADR) (NYSE:YGE) is a low cost Chinese producer. The firm benefits from cheap government loans, but its total debt to equity ratio of 4.39 is cause for concern. The Chinese government is willing to provide cheap capital to provide jobs and spur domestic investment, but it does not write blank checks. The recent Suntech bankruptcy is a stark reminder.