Solar and wind energy are making great strides. Every day we hear about a new plant going up or a solar company breaking records. In order to understand where the energy markets are heading, it is dreadfully important to not overemphasize these recent trends and fall prey to the availability heuristic. There are a number of ways to invest in clean energy, but only a number of these companies have a strong foundation. 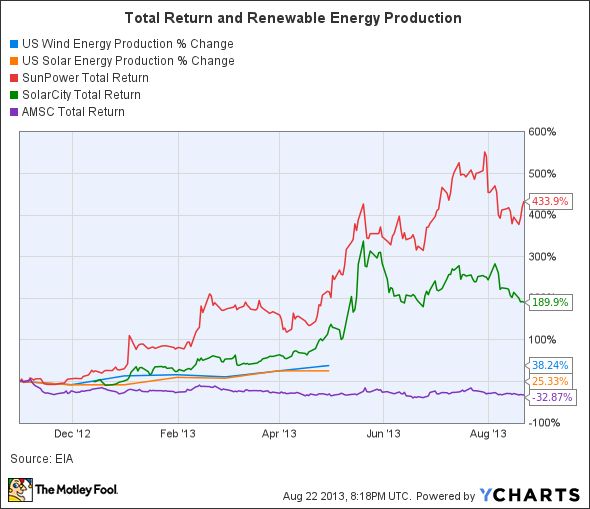 The Challenges
Wind turbines and solar panels eat up large amounts of space and are commonly placed far away from the end user. One way to deal with this issue is to distribute the devices closer to the end consumer, decreasing the need for costly transmission systems.

Another problem with the wide scale adoption of renewables is the lack of an effective storage solution. Japan is experimenting with a grid scale battery, but it is far from mass commercialization.

To help give renewables a leg up, governments throughout the world are giving various subsidies. These subsidies have the long term goal of supporting R&D budgets until solar and wind prices fall enough that they can compete on equal footing with other fuels.

The Solutions
SunPower Corporation (NASDAQ:SPWR) has had a great amount of success placing solar panels closer to the end user in the U.S. In the second quarter of 2013 it signed over 2,200 leases and around $100 million in commercial sales. With a little help from Japan’s thriving rooftop market and its U.S. operations, the company was able to decrease inventory by $46 million and increase cash and investments to $720 million from Q1 2013 to Q2 2013.

Solar installers like SolarCity  are highly dependent on fickle government subsidies. A decrease in the feed in tariff will decrease the amount of money the average solar panel makes, thus decreasing demand for new systems.

SolarCity is helping to make the economy greener, but it is difficult to get excited about the company as an investor. The firm has no real barrier to entry. Finding an electrician to install a solar system is not exactly a high value added service. Net metering allows consumers to sell extra power produced by their solar panels back into the grid, and these policies are under heavy attack.

There is strong support to pass the MLP Parity act and limit or drop traditional renewable tariffs, as it would allow fossil fuels and renewable energy to compete on more equal footing. If it does pass, there is the possibility that SolarCity would reorganize itself as an MLP to lower its capital costs. The scaling back of traditional tariffs would hurt SolarCity’s growth. On the other hand, lowering its cost of capital would allow it to be more competitive and return more cash to investors in the form of distributions; thus making the company an interesting income investment.