It’s been a busy, chaotic two weeks in the spinal and orthopedic devices market. Three major companies — Stryker Corporation (NYSE:SYK), NuVasive, Inc. (NASDAQ:NUVA), and Orthofix International NV (NASDAQ:OFIX) — recently made headlines for a myriad of reasons including FDA approvals, accusations of falsified Medicare and Medicaid claims, and an embarrassing restatement of past revenue. Let’s take a look at how these headlines are currently affecting these three stocks that have diverged considerably over the past twelve months. 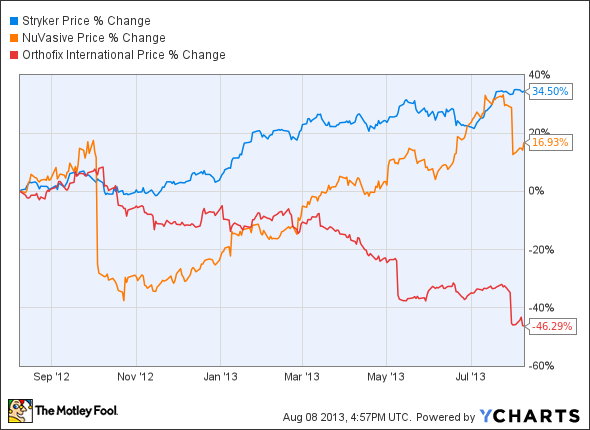 In a previous article, I discussed medical device maker Stryker Corporation (NYSE:SYK), which was dragged down by the recall of its Rejuvenate Modular and ABG II Modular-Neck Hip Stems last year. The company discovered that the implants could corrode and release metallic shards into a patient’s bloodstream, causing tissue and bone death. That recall cost the company $170 million last quarter, causing earnings to decline 34.5% from the previous year. Revenue, however, edged up 5%.

At the end of July, the Australian health department issued a warning regarding the company’s Oasys Midline Occipital Plate after problems surfaced in the United States and Belgium. The Australian government warned that the device, which is used to stabilize the spine, could break after surgery. Stryker Corporation (NYSE:SYK) has started an investigation into the reported issues, but has not issued a recall.

Some investors have questioned these quality control issues at Stryker Corporation (NYSE:SYK), but the company allayed some of those concerns recently when it announced the FDA approval of two new spine products for pain management and spinal fractures — the Venom RF cannula and electrode combo device and the 11g iVAS Balloon System.

These two products are expected to boost revenue at Stryker Corporation (NYSE:SYK)’s largest division, its Reconstructive segment, which accounted for 44% of the company’s top line last quarter. Many Stryker investors are also looking past the company’s past recalls and focusing on its purchase of Chinese spinal and trauma care company Paulson for $764 million in January, which is expected to give the company a major foothold in China.

NuVasive plunges after accusations of fraud

Whereas Stryker Corporation (NYSE:SYK) shareholders have been forgiving of the company’s missteps, the same can’t be said about NuVasive, Inc. (NASDAQ:NUVA), which plunged 13% on July 31 after the company disclosed that it had received a subpoena from the Office of the Inspector General of the U.S. Department of Health and Human Services, regarding possibly falsified or improper Medicare and Medicaid claims.

In March, the government issued a fraud alert regarding doctor-owned groups which were selling implantable medical devices ordered by their owners for use on their own patients. If wrongdoing is uncovered, NuVasive, Inc. (NASDAQ:NUVA) could be in violation of the anti-kickback statute, which could exclude the company from future participation in Medicare and Medicaid programs.

NuVasive is more directly focused on spinal care than Stryker. The company develops minimally disruptive surgical products and procedures for the spine, including biologics that can be applied in spine fusion surgery. Unlike Stryker, NuVasive, Inc. (NASDAQ:NUVA) is currently unprofitable, although revenue increased 7.3% year-on-year last quarter.

NuVasive, Inc. (NASDAQ:NUVA) CEO Alexis Lukianov addressed investor concerns during the company’s quarterly conference call, stating, “We have an exceptionally strong internal compliance team who have built, managed, and overseen all of our compliance programs.” He also noted that “audits and investigations have been increasingly common” due to the “potential off-label marketing of devices” across the industry. Investors, however, aren’t fully convinced, and shares remain down 7% over the past month.

Let’s forget the past two years ever happened

However, NuVasive, Inc. (NASDAQ:NUVA)’s problems don’t seem that bad when compared to spinal and orthopedic device maker Orthofix International NV (NASDAQ:OFIX)’s current predicament. Orthofix International NV (NASDAQ:OFIX) recently delayed the filing of its second-quarter financials after disclosing that it needed to restate its financial results for fiscal 2011, 2012, and the first quarter of 2013, after discovering revenue that had been improperly recognized.