Three-dimensional printing sparked an explosion of excitement during 2012. The mainstream adoption of this technology led The Economist to predict a “third industrial revolution” and to envision the “factory of the future.” The former editor-in-chief of Wired Magazine left his post to become part of the “maker” movement he believes “will be bigger than the web.” You can expect the hyperbole to continue.

But is it really hyperbole? Not too long from now we could be printing our own clothes, our own cars, even our own ears! New possibilities seem to pop up on a weekly, if not daily, basis.

As a result, separating a future reality from a pipe dream can be incredibly difficult. Even the stock market (or especially the stock market) has had difficulty evaluating the key players in this industry. The chart below illustrates the market’s confusion in the past few months, during which the two largest 3-D printing companies, 3D Systems Corporation (NYSE:DDD) and Stratasys, Ltd. (NASDAQ:SSYS), reported impressive annual results yet watched their stock prices tumble subsequently. In investing terms, both of these stocks appeared to be “priced for perfection” at the start of 2012. 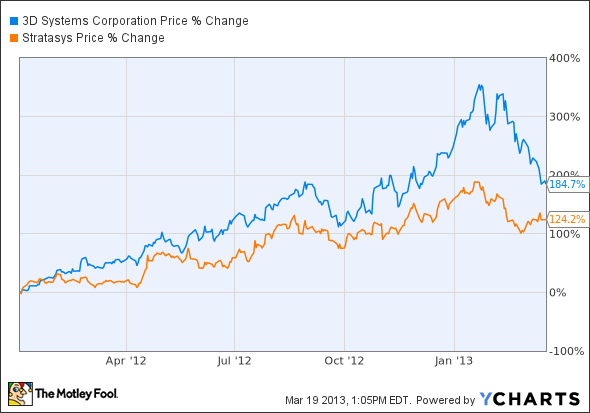 So, where do we look to gain a better understanding of 3-D printing’s true potential? Perhaps we should recall a technology visionary of the past, who witnessed the transformative power of advanced machines firsthand.

In 1989, none other than Apple Inc. (NASDAQ:AAPL)‘s young founder, Steve Jobs, described the effect of empowering individuals with new, advanced “tools” in a fascinating interview with Inc. magazine:

JOBS: You see, I think humans are basically tool builders, and the computer is the most remarkable tool we’ve ever built. The big insight a lot of us had in the 1970s had to do with the importance of putting that tool in the hands of individuals. Let’s say that—for the same amount of money it takes to build the most powerful computer in the world—you could make 1,000 computers with one-thousandth the power and put them in the hands of 1,000 creative people. You’ll get more out of doing that than out of having one person use the most powerful computer in the world. Because people are inherently creative. They will use tools in ways the toolmakers never thought possible. And once a person figures out how to do something with that tool, he or she can share it with the other 999.

Fast-forward 24 years, replace “computers” with “3-D printers”, and it is easy to see how we could be on the cusp of a similar technological sea change. Steve Jobs, recognized by Inc. as the “Entrepreneur of the Decade” in the 1980s, had a knack for understanding how technologies might evolve, unlike skeptics who refuted the idea that everyone would need a PC in their homes. Similar naysayers exist today, questioning why ordinary households would ever require access to a handy 3-D printer.