When a company is growing as quickly as 3D Systems Corporation (NYSE:DDD), in an industry with tremendous promise, it can be difficult to gauge the importance of earnings. Do you ignore profit while the company builds sales? And if the quality of those earnings is difficult to assess because of recent acquisitions, should you just focus on the company’s valuation versus its peers?

The short answer is that earnings always count, and even in situations where the herd is snapping up shares largely for future potential, understanding a corporation’s current profit or loss can arm you with the confidence to either to jump in or pass on the opportunity. Moreover, it can illuminate which aspects of earnings will be important in the future.

A considerable GAAP
Like many other companies, 3D Systems Corporation (NYSE:DDD) includes non-GAAP earnings and metrics in its earnings releases and SEC filings. GAAP is an acronym for “generally accepted accounting principles,” and publicly traded companies are required to file their financial statements under these guidelines, which seek to ensure that the economic reality of a company is reflected across its financial statements. Corporations are allowed to provide alternative numbers alongside GAAP earnings. According to its most recent SEC filing, 3D Systems asserts that it uses non-GAAP earnings to help investors better understand the impact that numerous acquisitions have had on the company’s results.

How does management arrive at these adjusted numbers? The most prominent item the company strips out on a consistent basis is amortization of intangibles. In the first half of 2013, adding back amortization improved earnings by nearly 40%.management understandably wants to remove amortization to arrive at what it believes to be a more representative portrayal of earnings. After all, it’s a non-cash number — a way to assign expense to intangible items. Does the expensing of items like patents and licenses really have any bearing on the day-to-day operations of the company?

In 3D Systems Corporation (NYSE:DDD)’ case, amortization has everything to do with earnings, and you should read management’s non-GAAP presentations, but not rely on them as the primary view of results. The reason stems from the path the company has taken to grow. If you follow 3D Systems Corporation (NYSE:DDD), you’re probably aware that it’s a serial acquirer of other companies. After sleepily plodding along for most of the 2000s, it began buying up smaller 3-D companies in 2010, and since then, it’s been in a royal hurry to acquire revenue and stay ahead of rivals such as Stratasys, Ltd. (NASDAQ:SSYS). Since 2010, the company has generated $125.3 million in operating cash, yet it has raised almost $590 million through stock and debt issuances, and it’s used up $381.7 million of that cash to fund acquisitions.

As a result, goodwill and other intangibles are now the largest assets 3D Systems Corporation (NYSE:DDD) owns. The following table and chart give us a sense of the proportion of these assets to tangible assets: 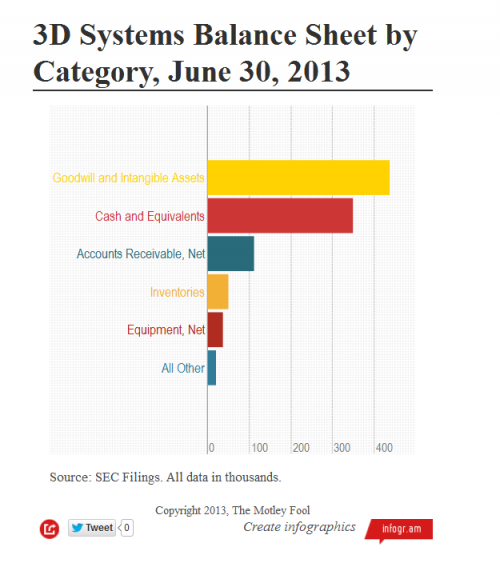