In researching stocks for the Fool, I’ve incorporated a Motley Fool Earnings Quality (EQ) Score that taps into a database that ranks individual stocks. The database designates an “A” through “F” weekly ranking, based on price, cash flow, revenue, and relative strength, among other things. Stocks with poor earnings quality tend to underperform, so we look for trends that might predict future outcomes.

Today’s stock, Rackspace Hosting, Inc. (NYSE:RAX), earns a failing “F.” Let’s see how it measures up against some of the competition.

San Antonio-based Rackspace is an open-source cloud computing company that manages Web-based IT systems for everything from small businesses to large worldwide enterprises. Founded in 1998, the company has historically treated investors well. The stock set a high of $79.24 on Jan. 24, a 92.24% increase from a low of $41.22 on July 24 of last year. It hasn’t even seemed to matter that Rackspace competes cloud-computing against titans such as Amazon and Google — at least not until recently.

Rackspace’s stock price had increased almost 20-fold until its recent revenue shortfall. On Feb. 12, the company reported quarterly revenue of $352.9 million and GAAP earnings per share of $0.21, against analysts’ consensus estimates of $355.4 million revenue, and $0.21 EPS. That revenue miss sent the stock plummeting more than 17% the next day.

Even with the current price hovering around $57.50, Rackspace’s P/E ratio of 76.6 shows just how much momentum investors can put into a stock despite fundamentals that don’t back up the price. Its revenue and earnings trends, at 25% and 17%, respectively, certainly don’t justify its lofty P/E. But since the revenue miss is what appears to have spooked investors, let’s look at Rackspace’s income-statement metrics.

While Rackspace’s income statement exhibits positive growth trends, revenue, operating income, net income, and earnings per share are all slowing down. In addition, while the EBITDA margin for the past 12 months shows slight growth from 28% to 32% over the past two years, the operating cash flow margin over the past 12 months has declined slightly, causing the spread between the two metrics to widen. That means earnings aren’t translating into cash flow.

Operating cash flow continues to grow, but free cash flow — operating cash flow minus capital expenditures — is anemic. Also notice that days payable outstanding — a measure of how long it takes to pay monies due — jumped markedly last quarter and year over year. Total outstanding payables of $175.13 million are more than triple the amount in previous quarters.

Let’s look at the competition.

Amazon.com, Inc. (NASDAQ:AMZN)
To its credit, Amazon ranks a “B” for earnings quality, but that could be even better if it weren’t for its unsustainable short-term boosts to operating cash flow. Amazon’s payables are four times as high as receivables, and the status of days payable outstanding is worrisome at nearly 58 days, with a rising seasonally adjusted trend line. 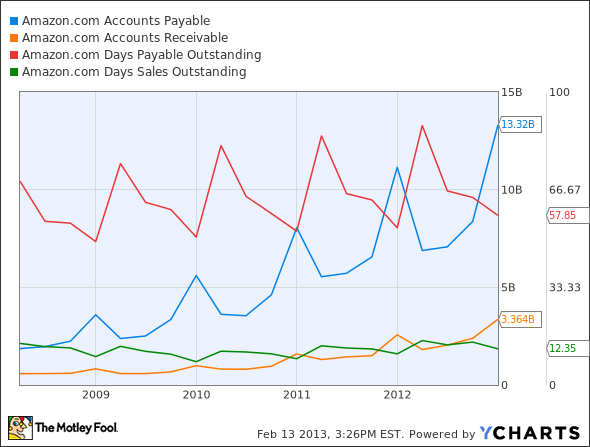 Amazon’s stock-price appreciation has been nothing short of ethereal. The company has lofty visions for cloud-based retailing, but it won’t unseat Wal-Mart Stores, Inc. (NYSE:WMT) anytime soon as the world’s biggest retailer. Amazon’s latest quarterly revenue of $21.27 billion was only 18% the size of Wal-Mart’s nearly $114 billion. Amazon’s revenue also missed expectations by nearly $1 billion for the most recent quarter, and because of negative earnings for the quarter ended Sept. 30, the stock has no trailing P/E ratio. Yahoo! Finance indicates a forward P/E of 73.7, which is sky high.

Like most retailers, Amazon’s metrics reflect seasonality and low margins. Yet despite missing revenue estimates, investors didn’t burst Amazon’s bubble and instead took the stock higher because of their perception of a slight margin expansion. And so the bubble continues to grow.

This company is clearly a momentum play, and for now investors are content to push its stock price higher. I’m not sure I want to climb on board, though.

Google Inc (NASDAQ:GOOG)
You might not guess it from Google’s lofty stock price, but Amazon generates more revenue per quarter than the search king does. From an earnings perspective, however, Google is far more profitable. But that’s not the end of the story. Google has an EQ score “F,” based on two factors: Its stock price has outpaced its revenue or earnings growth, and more importantly, its costs are rising faster than revenue is growing. Its year-over-year rise in the cost of goods sold last quarter was 68%, and administrative costs rose 39%.

Google’s stock has appreciated by 40.5% between June 14 of last year and Feb. 8, compared with year-over-year revenue growth of 36% and earnings growth of only 7%. Yes, that’s impressive, but it doesn’t make up for the disconcerting expansion in costs. See for yourself the effect on margins. 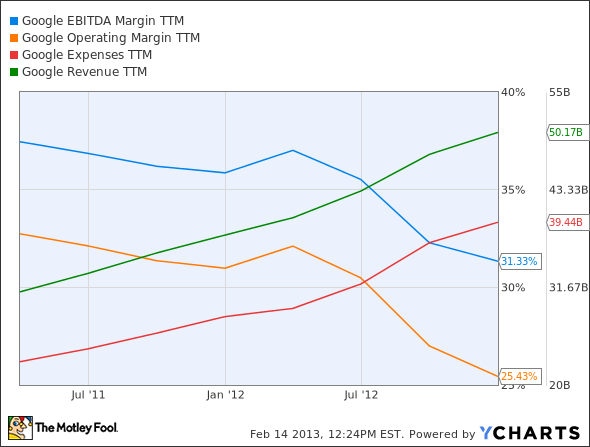 To put a finer point on it, look at the decline in operating cash flow margin for the trailing 12 months, as well as the rise in days sales outstanding and receivables as a percentage of revenue.

Foolish bottom line
These companies, and countless others too many to mention, are embracing cloud computing as the next big paradigm. But the future of the cloud may be murkier than the media would have us think, given a fair amount of privacy and security issues. And there’s also the reality that costs must still be controlled. Large data centers that manage the immense amount of information of Web-based companies have become the “bricks and mortar” equivalent of yesterday’s traditional retailers, and they don’t come cheap.

As always, Foolish readers should base investment decisions on earnings quality. If you believe in this new paradigm, then be prepared to weather the inevitable turbulence it will bring to your portfolio.

The article Storm Clouds for Rackspace Hosting? originally appeared on Fool.com and is written by John Del Vecchio.

Fool contributor John Del Vecchio is the index provider for the Forensic Accounting ETF (FLAG), an exchange-traded fund using forensic accounting analysis. He owns none of the shares in the companies mentioned in this article. The Motley Fool recommends Amazon.com, Google, and Rackspace Hosting and owns shares of Amazon.com and Google.

In The Race of The Three Horsemen of Tech – Google Inc (GOOG) Is the...

Google Inc. (GOOG) Will Be the Next Apple Inc. (AAPL)?
Monthly Newsletter Strategy
Download a free copy of our newsletter and see the details inside!
Hedge Fund Resource Center
Billionaire Hedge Funds