With its crisp texture, salty and savory taste profile, and accessible price, the venerable McDonald’s Corporation (NYSE:MCD) French fry is a gateway to other items on the company’s menu. But it’s also a long-term weapon in McDonald’s arsenal for continued global expansion.

For a global quick-service restaurant operator like McDonald’s Corporation (NYSE:MCD), an obvious benefit of localizing the supply chain is proximity: If a company can buy most its menu item ingredients locally, transportation and import costs are reduced, which boosts gross profit. In the case of French fries, buying locally in international markets leverages that boost, due to processes that McDonald’s pioneered. The company essentially reaps a markup on a product that is mostly finished when it takes delivery. From receiving bags of processed, blanched frozen fries, to tossing the fries into fryers, to placing the iconic, overflowing red and yellow fry box package on a customer’s tray, the product requires minimal touches.

The model is similar to McDonald’s Corporation (NYSE:MCD) soft-drink offerings. McDonald’s buys concentrate from The Coca-Cola Company (NYSE:KO) and adds water at the point of sale, thus enjoying a considerable profit margin. Compare this to a typical burger, such as the Big Mac, for which McDonald’s must source beef, lettuce, bread, onions, pickles, cheese, and “special sauce,” while setting a price point somewhere between a specialty burger and a dollar menu McDouble. Every Big Mac must be assembled, whereas a Coke cup is either filled on an automated carousel or by the customer for a dine-in order. Similarly, multiple orders of fries can be fried in a single batch and simply scooped into packaging as orders are placed (or scooped and placed under heat lamps during peak periods).

Stealth weapon No. 2: The supply chain itself

Increasing the inherent margin in French fries by establishing supply beachheads around the world takes an enormous amount of planning, as one might imagine. McDonald’s Corporation (NYSE:MCD) may take years to build a supply chain when entering a new market — in the case of India, it prepared its supply chain for more than six years. When McDonald’s expands, however, most of the cost of localization is borne by its suppliers, on handshake agreements. McDonald’s non-contractual agreements with suppliers large and small is built on trust. Many of the company’s major supplier relationships run deep and have extended for decades, however, and this enables a company like McCain Foods to make investments overseas in the hundreds of millions once it knows McDonald’s will enter a market. McDonald’s supply chain is essentially 100% outsourced, and it’s one of the drivers that has produced a profit machine that its competitors have a hard time replicating: 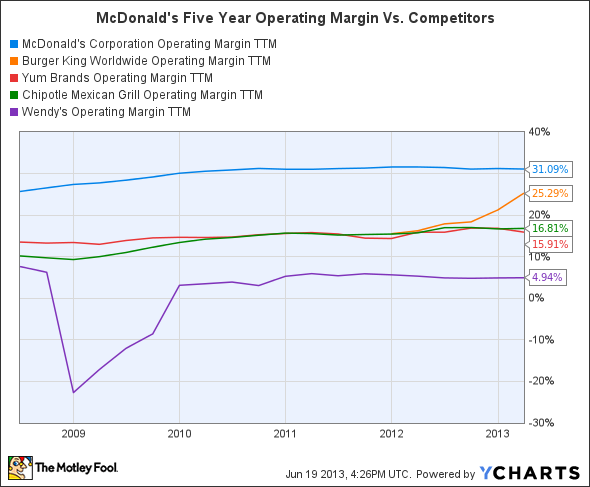 Contrast McDonald’s operating margin to Yum! Brands, Inc. (NYSE:YUM), which owns outright distinct portions of its supply chain and has chosen to own its distribution system in China, and operate 20 logistics facilities within this system.

Over the years, as more revenue has shifted to Europe and the grouping known as Asia, the Pacific, and the Middle East (APMEA), McDonald’s model has enabled it to maintain it gross margins. In fact, local sourcing has contributed to a net growth in margin over the last 10 years. Below, you can see how the composition of revenue is changing:

During this period, as McDonald’s hasn’t ceded any gross profit; in fact, by localizing production and having most of that cost borne by trusted suppliers, gross profit is on an upward slope: