One of the keys in investing is to find companies that have low downside risk but still have a great deal of upside potential.  This is exactly what Starwood Hotels & Resorts Worldwide, Inc (NYSE:HOT) gives you. It has an established position in the luxury hotel market and has weathered the most recent recession reasonably well. At the same time it is in the process of a major expansion into China, and thus provides substantial growth potential.

The impact of China on the hotel market

According the United Nations World Travel Organization, China is now the largest source market in terms of spending in tourism with total expenditures on travel abroad reaching $102 billion (Yahoo! Finance).  Furthermore, it has 170 cities with populations surpassing one million, and inequality is high — one academic survey said the top 10% of households control 56% of the income (Wall Street Journal). Furthermore, the luxury and near-luxury hotel market penetration is not as high as it could be. In other words, we have a classic growth opportunity for companies such as Starwood Hotels & Resorts Worldwide, Inc (NYSE:HOT).

Starwood Hotels & Resorts Worldwide, Inc (NYSE:HOT) was the first hotel company to enter the market, and China is already its second-largest market. It has opened 20 hotels so far this year, and has another 120 in the pipeline. This growth makes up 44% of its total planned growth, with other Asian countries making up another 16% (Annual Report). This growth in other Asian countries is also encouraging because as these countries grow they will join China in having larger upper-middle classes and thus cause a rise in demand for high-end hotel services.  When this occurs, Starwood should be well-positioned to take advantage of that growth. 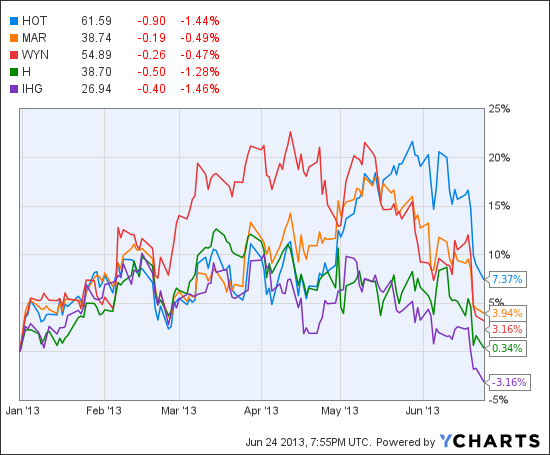 Marriott International Inc (NYSE:MAR) is in a very similar position with plans to open about one hotel a month in China for the next five years. This is about half the number in Starwood Hotels & Resorts Worldwide, Inc (NYSE:HOT)’s pipeline Furthermore, its current position is weaker with about 137 properties in its Asia-Pacific region compared to Starwood’s 243 properties (Marriot Annual Report). The financial figures of both companies are solid though. Marriott International Inc (NYSE:MAR) had 6% REVPAR growth, and Starwood Hotels & Resorts Worldwide, Inc (NYSE:HOT) had about 5%. Furthermore, they both are focused on the near-luxury and the luxury market with its potential to cater to China’s rising upper middle class.

InterContinental Hotels Group PLC (ADR) (NYSE:IHG) is in a slightly worse position with a REVPAR growth of only 1.8%.  Furthermore, it is going for the Greater Chinese market less aggressively, with only 20% of its new openings there. Wyndham Worldwide Corporation (NYSE:WYN) has had stronger growth in REVPAR at about 4%, However, its focus on the emerging Chinese market is even smaller. It makes makes almost no mention of it in its most recent Annual Report, which is troublesome because this market is competitive enough, if a company does not go after the market aggressively it will likely not get a large piece of the pie. Hyatt Hotels Corporation (NYSE:H) is smaller than the above companies with only 508 properties. Furthermore, its investment in China is not as high, with currently only 55 properties in Asia-Pacific (Hyattt). In addition, its P/E ratio is quite high at 74.46. Its REVPAR did grow by 7.0%, which is a good sign.