“The Great Recession” had a big impact on the United States. The stock market lost over half its value from late 2007 to early 2009. Gas prices doubled, and oil spiked to $147/barrel in the summer of 2008. Higher gas led to inflation in other areas such as food. The speed of these spikes had a profound impact on Americans. People began to drive less. Companies like Wal-Mart and McDonald’s saw an earnings boost as consumers were driven to their value prices.

Some companies are simply better positioned than others to thrive during rough times. Is Panera Bread Co (NASDAQ:PNRA) terribly positioned? Some analysts feel this company is in a difficult situation. If the economy improves, consumers will leave for more upscale options. If the economy weakens, consumers will flee for more affordable prices. Should investors start worrying?

At first, this premise seems logical, but the data doesn’t back it up. Below is Panera Bread Co (NASDAQ:PNRA)’s chart with the recession highlighted in purple. 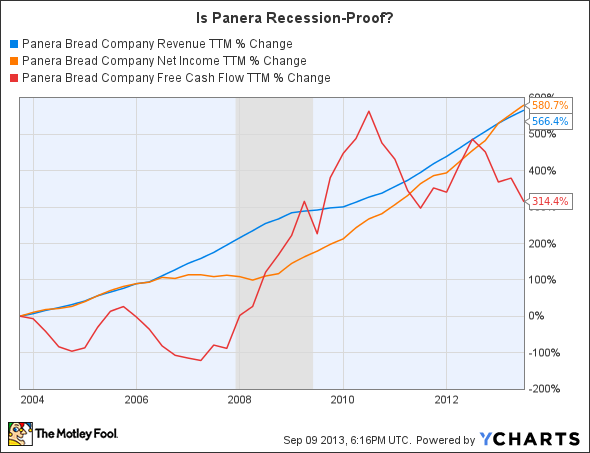 As it turns out, Panera Bread Co (NASDAQ:PNRA) has consistently grown revenue, net income, and free cash flow over the past 10 years. Most of these increases were driven by new units as the chain expanded. But perhaps more relevant, same-store sales increased 5.5% in 2008, the heart of the recession. Last year, a good year for the economy, same-store sales were up 6.5%.

History shows us that Panera Bread Co (NASDAQ:PNRA)’s customer base grows during hard times, and it grows even faster during good times. Maybe Panera isn’t terribly positioned after all.

Panera Bread Co (NASDAQ:PNRA) operates in the uber-hot fast casual segment. Many fast-casual chains are able to expand at extraordinary rates thanks to the popularity of the segment, and Panera is no exception. At the start of 2009, the company operated 1,252 locations. At the end of last year, it operated 1,652, an increase of 32% in four years. This year the company expects to open 115 to 125 more.

Yet during this season of growth, Starbucks Corporation (NASDAQ:SBUX) shut down under performing stores in a repositioning effort. These efforts have brought the company from a dismal 2009, to three straight years of same-store sales increases of 7% to 8% annually. Now positioned for better growth, it expects to operate 20,000 locations by 2014.

Competitor Einstein Noah Restaurant Group, Inc. (NASDAQ:BAGL) is also growing with plans to expand 10% annually, but same-store sales have been flat. In reality, restaurant traffic was down in the most-recent quarter, but balanced out with a 3% rise in average tickets. 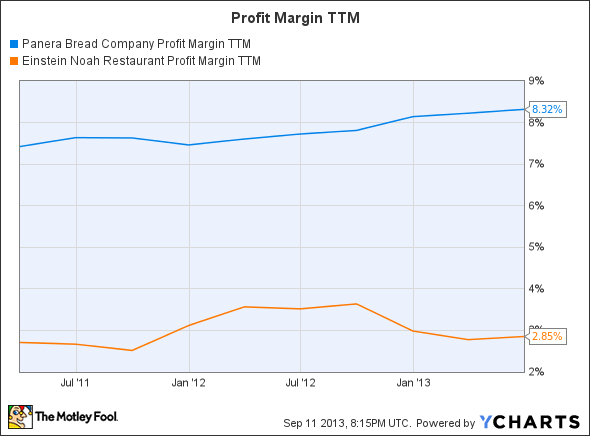 With a razor-thin profit margin, Einstein Noah Restaurant Group, Inc. (NASDAQ:BAGL) can’t afford a decrease in traffic. Medium-term revenue and net income will keep climbing with new units, but over the long term, the company needs same-store sales to improve.

One often overlooked advantage of Panera is its zero-debt position. Not only is the company expanding at an impressive rate, it is doing so with free cash flow. This may not seem significant, but consider that Einstein Noah is projecting interest expenses on its debt to be around $6 million for 2013. Interest expense (just last quarter), affected earnings by about $0.06 per share, or 35% considering earnings per share landed at $0.17. 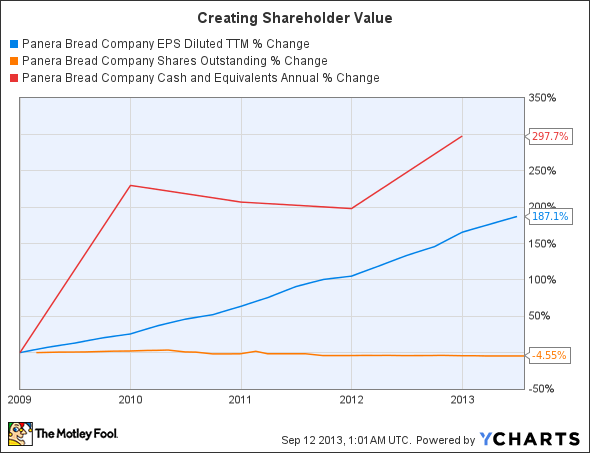 I see a zero-debt position as a common factor among companies that are creating shareholder value. This strong balance sheet frees Panera from worries such as rising interest rates and dwindling liquidity. In exchange, the company can focus on shareholders by growing earnings and buying back shares.