Starbucks Corporation (NASDAQ:SBUX) had a killer third quarter earnings report. It surprised analyst expectations, as the company’s revenue rose by 13% due to strategic growth in China, as well as moderate expansion in Europe. Can we leverage this data in other useful ways, though? Yes, we can–in fact, we can use this data to predict the future of a similar company: McDonald’s Corporation (NYSE:MCD).

The two companies have similar plans for both domestic and international growth. Economic activity in the U.S. and especially Asia have a huge effect on the numbers both companies put out each quarter. If one does well, the other generally follows.

The two companies have similar revenue trends. Starbucks Corporation (NASDAQ:SBUX)’ revenue generally peaks in the fourth quarter. McDonald’s Corporation (NYSE:MCD) usually has its strongest revenue in the third quarter of the year. That doesn’t seem similar at first glance, but consider this: McDonald’s reports on a different schedule that is almost an entire quarter behind the earnings season of most companies. For example, McDonald’s just released its second quarter results on July 22, whereas Starbucks released its earnings report for the third quarter on July 25. 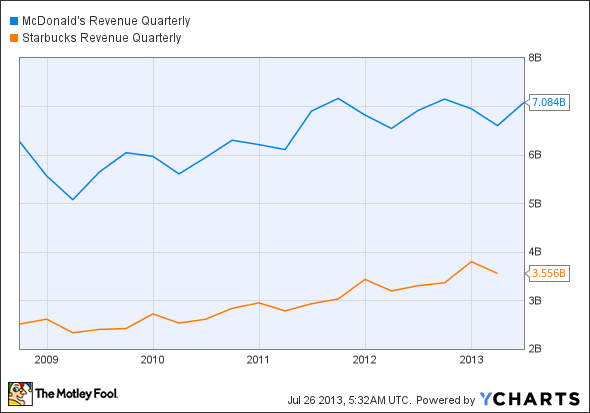 Ignoring the fact that Starbucks Corporation (NASDAQ:SBUX) hasn’t pushed out the data for its two most recent quarters, you can see the relationship between the revenue of the two companies. Starbucks can be a leading indicator for the performance of McDonald’s Corporation (NYSE:MCD), and the companies are very similar in terms of trends.

Just how similar are they?

Starbucks Corporation (NASDAQ:SBUX) and McDonald’s Corporation (NYSE:MCD) don’t only have similar revenue trends. The two firms both have very similar business models, influenced by the same macroeconomics – which is partly responsible for their similar quarterly performances. Let’s first address how both companies are similar in business strategy in order to qualify the use of Starbucks as a leading indicator of McDonald’s performance.

Both companies are strategically expanding operations in Asia. Starbucks Corporation (NASDAQ:SBUX) is seeing huge growth in the area, and McDonald’s Corporation (NYSE:MCD) expects to have similar results in the coming quarters. While McDonald’s has encountered problems this year, including the avian flu scare in China, the company is still likely to have relatively strong third and fourth quarters.

Starbucks Corporation (NASDAQ:SBUX) recently expanded into Vietnam, a country that expects 5.5% gross domestic product growth for 2013. The rapidly growing country is also in the sights of McDonald’s Corporation (NYSE:MCD). Expressing its plans in its second quarter earnings call, McDonald’s is bringing its brand to the country to match that of Starbucks.