In that spirit, we three Fools have banded together to find the market’s best and worst stocks, which we’ll rate on The Motley Fool’s CAPS system as outperformers or underperformers. We’ll be accountable for every pick based on the sum of our knowledge and the balance of our decisions. Today, we’ll be discussing Starbucks Corporation (NASDAQ:SBUX), the world’s largest coffee-shop chain.

Starbucks by the numbers
Here’s a quick snapshot of the company’s most important numbers:

Sean’s take
There’s not much to say about Starbucks that its first-quarter earnings report in January didn’t already spell out for investors. China is a hot spot of growth, with the China/Asia Pacific region delivering 28% revenue growth, while global same-store sales throughout the remainder of the company remain strong — up 6%, thanks to incredible branding, increase traffic, solid pricing power, and a knack for staying ahead of the innovative curve.

Earlier this week, I broke down Starbucks Corporation (NASDAQ:SBUX)’ outperformance into three rudimentary building blocks. I saw the company first as an innovator that remodeled and refreshed its stores to make them more inviting and reworked its food line to appeal to healthier eaters.

Next, I envisioned Starbucks as an emulator that saw a concept from another vendor and ran with it. This is what prompted Starbucks to develop its own single-serve brewing and espresso machine known as the Verismo to take on Green Mountain’s dominant Keurig system, and this is also what drove it to emulate Whole Foods Market, Inc. (NASDAQ:WFM) by striking deals with local and organic growers to bring more nutritious food choices and drinks into its stores.

Click here if you’d like to read a more thorough analysis of my thoughts on Starbucks, but the simple answer is that yes, it’s a buy, even now. Starbucks is a dominant force in coffee that refuses to be stopped, and there is plenty of room for it to grow overseas, or even expand sales domestically through new food and drink offerings.

Alex’s take
I took a more fundamental look at Starbucks Corporation (NASDAQ:SBUX)’ opportunity than Sean, which is a rarity — usually he’s the one who comes at the stock with a bunch of numbers that I hadn’t considered. My thoughts on Starbucks were pretty straightforward heading in. Sure, it’s a highly valued stock, but it’s been highly valued relative to the rest of the market for years. If there’s not a reason, then the market must be wrong. So, is the market wrong?

Starbucks is doing better than McDonald’s, which has been trying its level best to expand beyond cheap burgers and McNuggets into the coffee “experience,” at least in terms of earnings growth. It’s not growing as fast as Dunkin — but that improvement should be heavily discounted, as the doughnut maker has only a few quarters of reported earnings so far. It gets an advantage over Green Mountain probably on the strength of brand presence and a high net margin for operating so many retail beverage stores. More importantly, it’s not overvalued relative to itself. The company’s two-year average valuation is fewer than three points below its current valuation.

More importantly, Starbucks has demonstrated pricing power in an industry notoriously reliant on the cost of commodity foodstuffs. When coffee bean prices rose, Starbucks managed to increase its store prices, and from the look of things, it did so beyond the cost of the coffee. When coffee prices fell again, Starbucks held the line — and its new, fatter margins: 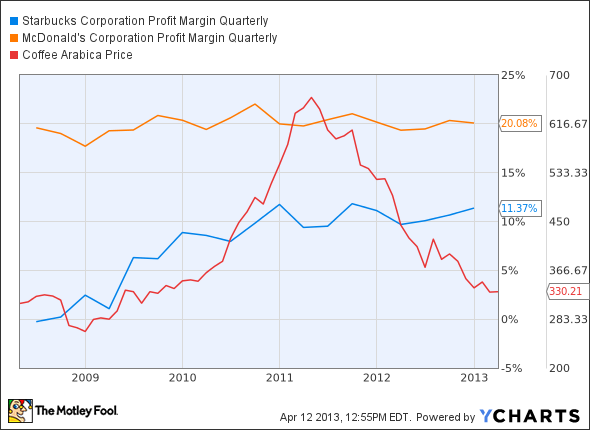 While McDonald’s hasn’t seen margins deteriorate, they have weakened slightly, which is not a trend you want to see out of any globe-spanning restaurateur. On the other hand, Starbucks’ margins have never been higher. If coffee prices go back up, Starbucks already knows it can raise prices and justify itself to consumers, and consumers will pay up.

I just don’t see Starbucks Corporation (NASDAQ:SBUX) losing its touch any time soon. That’s why I’m giving it a thumbs-up as well. It may not grow as rapidly as it has exiting the last recession, but it should easily beat the market for years to come. You can read more about my reasoning by clicking here.

Travis’ take
I’ll admit that I’m one of the few people in the U.S. who doesn’t drink coffee and has rarely stepped foot into a Starbucks. But that doesn’t mean I don’t appreciate what Starbucks has built and how it plans to grow in the future.

Sean laid out the company’s strategy nicely, and Alex gave a fundamental reason the stock is a buy, but I’ll look at Starbucks from a more emotional level. After all, coffee is an emotional drink. It wakes drinkers up in the morning and has some sort of soothing effect I’ll never fully understand, bringing consumers back time and time again. This creates an emotional connection with the flavor, ambiance, and experience that is Starbucks and generates consistent returns for shareholders.

So when I looked at Starbucks Corporation (NASDAQ:SBUX)’ stock, I looked at it from a brand perspective. Somehow, Starbucks has managed to evolve and adapt as tastes and consumer demands have changed. It’s making home brew systems, tea offerings, and even other healthy drinks. The company has a way of changing with the times, and it all comes back to the brand that is Starbucks.

It’s hard to define the value of a brand, but if we look at the history of brands such as The Coca-Cola Company (NYSE:KO), NIKE, Inc. (NYSE:NKE), McDonald’s, and The Walt Disney Company (NYSE:DIS), we can see that they create a staying power. There will be ebbs and flows in the business, but for investors buying for the long term, a brand acts as a moat keeping competitors out.

In my detailed look at Starbucks earlier this week, I pointed to Caribou Coffee as an example of a company that couldn’t get past the Starbucks brand. The product is arguably just as good and definitely more creative (if you like that kind of thing), but even in Caribou’s backyard at the University of Minnesota and Minnesota-based Target Corporation (NYSE:TGT), Starbucks is king.

We could argue P/E ratios and margin trends all day, but I’m giving Starbucks a thumbs-up because I think it has the brand and the management to be a stock you can buy and forget about for a decade. That’s exactly the kind of stock I’m looking for.

The final call
I hope you’ve had your coffee for the day, because that would indeed the very rare unanimous CAPScall of outperform. The interesting aspect of our deeper dive into Starbucks is that we all see value in the company, yet from different angles. Travis doesn’t even drink coffee yet understands the branding and adaptation value that Starbucks can offer. Alex, an avid coffee drinker, approached Starbucks from a fundamental standpoint and saw a company with amazing pricing power and robust margins. I (Sean) angled my outperform call based on Starbucks’ past, present, and future growth strategies, noting that it’s a leader in innovation, emulation, and collaboration. Added together, that’s a pretty convincing case for a long-term outperform CAPScall.