For a long time the office supply industry had three main players: Staples, Inc. (NASDAQ:SPLS), Office Depot Inc (NYSE:ODP), and OfficeMax Inc (NYSE:OMX). After years of speculation the two smaller companies, Office Depot and Office Max, have agreed to merge with each other in an attempt to become more competitive. Staples, Inc. (NASDAQ:SPLS) does about $24 billion in annual revenue compared to a combined revenue of about $17.5 billion for the two merging companies, meaning that Staples will still be the largest office supply chain.

But it’s not just about size. Staples has been able to achieve a robust, consistent free cash flow compared to Depot and Max, as you can see from the chart below. 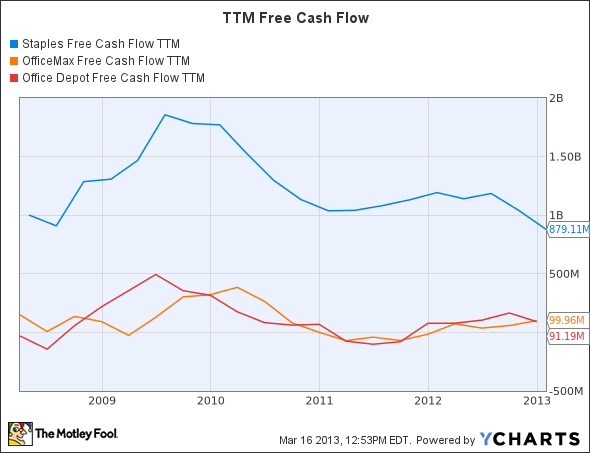 If you were to straight-up combine Office Depot and Office Max without any synergies or cost-savings then Staples would still be more than four times as profitable as the combination while only having 37% more revenue. The fact that Staples, Inc. (NASDAQ:SPLS) has been able to maintain this cash flow even as the internet was supposedly killing the industry says something powerful about Staples. The company has been focusing on e-commerce and this focus has made the company the second-biggest online seller by revenue, behind only Amazon.com, Inc. (NASDAQ:AMZN). Online sales accounts for roughly 40% of total revenue, which means that Staples does about $10 billion in business online each year.

So the news that Staples, Inc. (NASDAQ:SPLS) is closing stores should be a positive, since this will lead to cost savings, which can be invested in the online business. At the end of 2012 Staples operated 2,215 stores globally, down from 2,295 stores at the end of 2011. The industry has changed, and Staples is changing with it.

Staples reported its full year results recently, with revenue declining from last year, but earnings adjusted for non-cash items was basically flat at $1.39 per share. GAAP earnings were negative due to a goodwill write-off of $811 million and $207 million in restructuring charges.

The fact that revenue dropped and earnings stayed the same shows that Staples’ cost cutting strategy is paying off. Q4 revenue was actually up 1.67% year-on-year, and the company expects a low-single-digit revenue increase in 2013.

Staples, Inc. (NASDAQ:SPLS) balance sheet remains strong, with $1.334 billion in cash and $1.989 billion in debt. This is about $1 per share of net debt. Staples recently engaged in a tender offer and retired a portion of high-interest debt, replacing it with new, lower interest debt. I explored how this would affect future interest payments a while back. Staples also has various pension plans, but they have a net over-funded status at this point.