Perhaps the most unknown yet important potential SPAC since Q2 2020 is the much anticipated public market launch of Sportradar, arguably the most influential sports data/analytics firm in existence globally. Indications are that COVID-19 propelled demand boom coupled with a tax-grab via sport betting legalization in key jurisdictions could lead to valuations as high as US$10-12 billion. Q4 2020 indicative IPO valuations hovered in the US$6-8bln range with JP Morgan and Morgan Stanley rumored to be in the mix as lead underwriters. SPAC valuations were at the higher end of that indicated range at US$8bln. 2021 the market fervor for SPAC’s and sport betting have propelled $378mm AUM $BETZ sport betting ETF+22% and ballooned Sportradar’s valuation to $10-12bln.

Led by Carsten Koerl, Founder and CEO since its’ formation in 2001 the St. Gallen, Switzerland headquartered Sportradar has 35 offices in 24 countries with 1,800 staff forming the ‘hive mind’ of sports data/statistics/AI. Sportradar coves 400,000 events annually across 60 distinct sport categories. Big data = big money. Private unicorns are famously shy, but we have a solid benchmark with the July 2018 divestiture by private equity firm EQT who sold 39% of Sportradar for an implied US$2.4bln valuation to Canada Pension Plan Investment Board (CPPIB) and growth equity fund TCV . Founder CEO Mr. Koerl took no proceeds and hence keeping his % ownership unchanged, a huge vote of confidence at Sportradar’s on-going prospects. 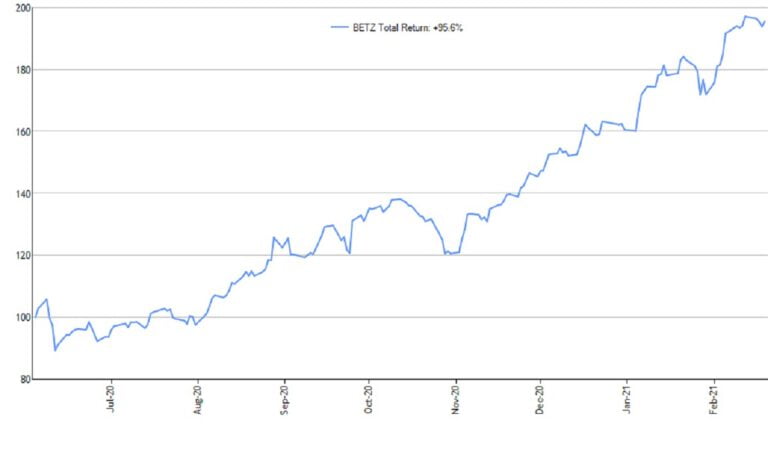 Sportradar have stuck deals with the NFL (no big surprise there, as they are part owners ), the NHL, MLB, FIFA, NASCAR and the NBA. NBA team owners Mark Cuban and Michael Jordan are part owners via their participation in the $44 million private funding round in 2016. Ted Leonsis, CEO of Monumental Sports and Entertainment is also a part owner.

To drive a $10bln+ SPAC valuation it is thought Sportradar will need to raise $750 million, but given their investor group pedigree Sportradar might take the interim/concurrent step of raising $2 billion via a Private Investment in Public Equity (PIPE) transaction with institutional investors looking to follow CPPIB’s lead (i.e. a near 4 banger inside of 4 years on $US936 million invested). A $2bln Sportradar PIPE could be taken up by a group of institutional investors such as Singapore’s GIC, Swiss National Bank, Japan’s GPIF, Australia’s Superfund and any number of Canadian pension funds (CDPQ, Omers, Ontario Teacher’s). Note: CPPIB has US$360 million in assets under management, hence their Sportradar investment represented 2.6% of assets under management (AUM). Having an institutional investor like the Canada Pension Plan onboard is a tremendous positive from a vetting perspective and shows that ESG exclusion screening (i.e. sin) is not the only game in town.

The bigger risk her may be that nobody is willing to sell Sportradar (yet). With DraftKings ($DKNG) sporting a $24bln valuation, largely on DFS (Daily Fantasy Sports), selling too early may be seen as a bigger risk than rolling the dice on a higher multiple. Sportradar is EBITDA and cash flow positive, it should be noted. Rating agencies privy to financial disclosures estimate EBITDA of $59 million.  No ‘price-to-sales’, TAM or similar poppycock required in getting your head around the potential valuation.

There are over 300 recents SPACs seeking investment prospects and the diversity of Sportradar’s mandate could allow the majority to find Sportradar to be ‘in scope’. There are only 5 sport related SPACs > $750mm presently. A betting man would assume Golden Sate Warriors co-owner Chamath Palihapitiya has a team on the case. The best adjective for Chamath (leg day optional) is smarmy, but his money is green and he seems to have the golden touch. Softbank’s Masayoshi Son has a war room staffed with financial engineers vetting deals as well. Softbank loves to swing for the fences and with their stock trading at all time highs, sporting a market cap of $175bln, Son-san could write a check for $12bln (<7% of mkt cap) and roll Sportradar into his conglomerate. There has been some chatter on the interweb about Avanti Aquisition Corp., $AVAN, the SPAC of Egyptian billionaire Nassef Sawiris vetting Sportradar. There are literally dozens of iterations that create shareholder value and with the public market valuations spanking private market valuations handily at present, I think the SPAC route is most likely. 2020 saw more SPAC issuance than the prior decade on the premise of “feed the ducks when they are quacking”.

Given the critical nature of Sportradar’s services as sport betting spoils migrate to live betting (Sportico’s sister publication Variety notes that 70% of the handle at European sports books are live bets versus 50% in the USA) I think Sportradar is holding “the nuts” and is more likely to be predator than prey. Recent podcasts with Carten Koerl do not give the impression that Sportradar in ‘in play’. Vertical integration from the provision of ‘picks and shovels’ to the sport betting industry into running their own book is a distinct possibility. Holding their best/fastest data in-house would be the equivalent of sucking all the oxygen out of the room of their competitors. This is the high frequency trading equivalent of the betting world. Sportradar > Flash Boys. Sportradar currently has 1,000 customers in 80 countries. Anti-trust concerns abound. A Swiss domicile helps in this regard.

In in post COVID-19 world, on-line is the place to be. There are 25 listed names in the sports betting and iGaming ETF with a market cap > $9bln. Brick-and-mortar, land-based casinos pale in comparison: $MGM $18bln, $CZR $17mm and $WYNN $14mm are the big ones. They have struck licensing deals with their on-line governors to garner a portion of the spoils once the biggest US markets get approved (New York and California). States are scrambling to approve online gambling in all forms for the tax receipts as they try to repair their battered economies. NJ collected $302 million in taxes related to gaming/casinos in 2020, despite their 15 land-based casinos receipts at $1.5bln being down 44%. All of the shortfall was made up from on-line wagering which doubled to $970 million (sport betting as a subset was up 33% to $398mm due to the dearth of live sporting events in the first half of 2020). Traditional casinos are taxed at 8%. Online games have a tax rate of 15% (virtual slots, poker, blackjack). Sports wagers are taxed at 8.5% if placed in a land-based casino and 13% when placed online.

Many countries legally allow sports betting, the USA a recent one with state specific approvals evident from 2019. USA football is #1 and NFL wagering account for 50% of all wagers. Globally, the NFL is #2.

Canada is expected to fully approve sport betting in the first half of 2021. With COVID-19 support approaching 20% of GDP, they sorely need the tax revenue. As with cannabis legislation this will be dealt with at the  federal level, i.e. One private member’s bill, referred to as the Safe and Regulated Sports Betting Act Bill C-218 repeals a section of Canada’s criminal code making wagering on a single sporting event illegal. The bill passed the 2nd reading in the House of Commons and, after a Justice Committee review, will be sent for a vote in the Senate. Hockey is big (NHL), but the NFL is bigger, even up north!

In India games deemed ‘skill’ games are allowed (i.e. poker). Cricket is far and away the most popular sport. $1bln + population, median age 27.

Africa is soccer (football) dominated, but 60 sports on offer. Nigeria has 60 million people aged 18-40 that engage in sport betting.

It is estimated that 96% of the world’s population will have access to online wagering within 5 years. This presumes the market environment in China, which is currently a ‘black market’  changes. All forms of gambling with the exception of the state run welfare lottery and sports lottery are illegal in China.

Japan is said to be studying approvals, but the state lottery and horse racing currently dominate. The government turn a blind eye to the pachinko industry (land-based, 180 decibel “door #3 in hell” standing pinball machines). Baseball is the most popular sport in Japan.

How To Participate: BETZ

$BETZ Roundhill Investments ETF. The Roundhill Sportsbetting & iGaming ETF is up 21.8% ytd in 2021. $BETZ is a double from launch in mid 2020. MER is a reasonable 0.75% (matching Cathie Wood’s $ARKK). $BETZ AUM is US$378mm presently (small, but with decent liquidity). The chart is a thing of beauty: 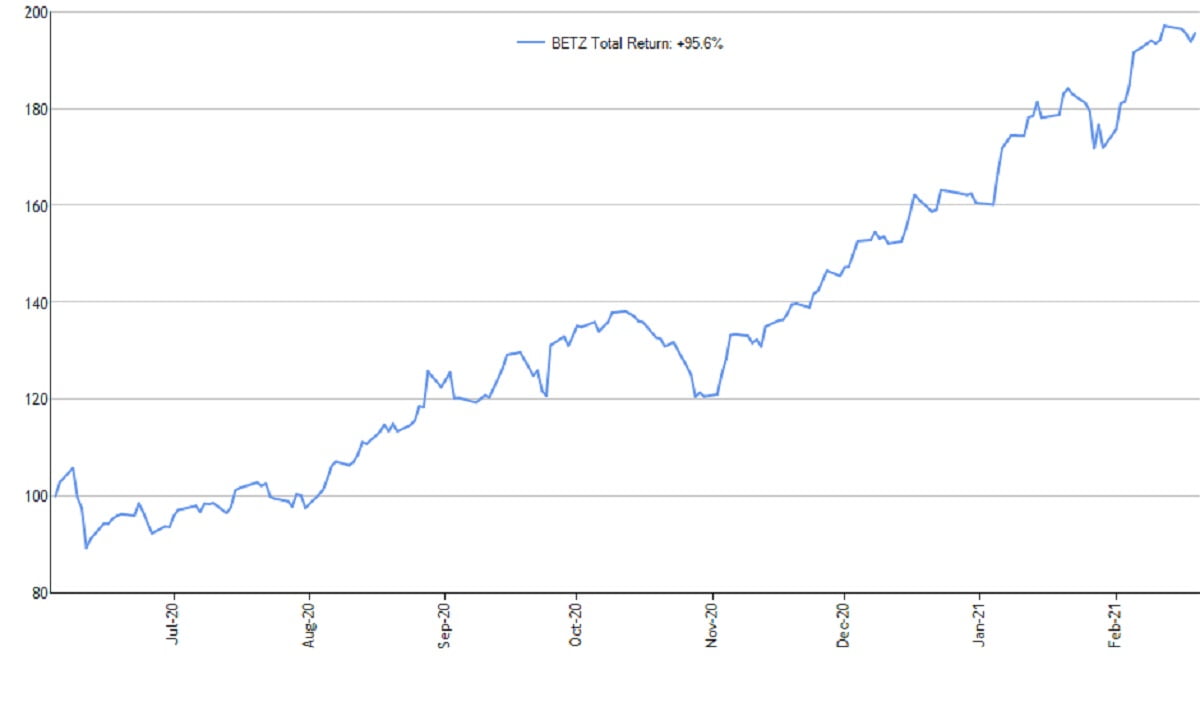 All that remains is choosing the best ticker symbol, Sportradar $SPRR has a ring to it?