Ultra-low-cost carrier, or ULCC, Spirit Airlines Incorporated (NASDAQ:SAVE) has been hit by a wave of selling pressure this week, after announcing that its largest shareholder — private equity firm Indigo Partners — is planning to liquidate its stake in the airline. Spirit Chairman William Franke is the managing partner of Indigo, and he (along with another Indigo partner) will step down from the Spirit Airlines Incorporated (NASDAQ:SAVE) board in connection with the stock sale.

Indigo Partners has had a major ownership position in Spirit Airlines Incorporated (NASDAQ:SAVE) since 2006, and has been instrumental in overseeing the company’s successful transition to the ULCC business model. However, its exit from Spirit should not be seen as a sign that Spirit has peaked. Indigo appears to be selling its stake in Spirit in order to chase an even bigger opportunity: Republic Airways Holdings Inc. (NASDAQ:RJET) subsidiary Frontier Airlines.

Republic Airways Holdings Inc. (NASDAQ:RJET) put Frontier up on the auction block in late 2011, but has delayed the sale process several times in order to make progress with Frontier’s restructuring process. Frontier is now a budding ULCC in its own right, albeit one that is much less profitable than Spirit. Indigo’s exit from Spirit Airlines Incorporated (NASDAQ:SAVE) is more appropriately viewed as a validation of the ULCC business model than a criticism of Spirit’s prospects. 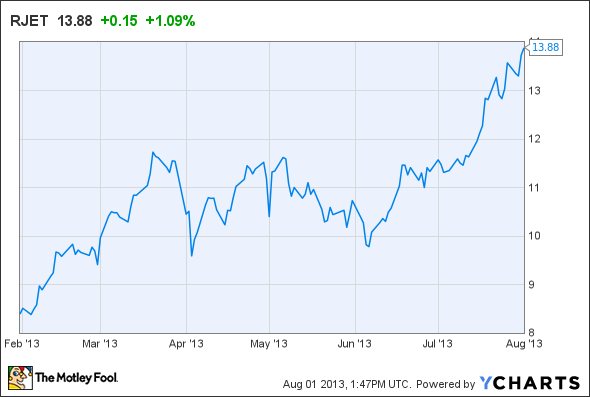 Due to confidentiality agreements, Republic Airways Holdings Inc. (NASDAQ:RJET) has been unable to announce the identity of the potential buyer or the terms being discussed. However, based on the timing of Indigo’s decision to sell its stake in Spirit and a little bit of investigative reporting by The Wall Street Journal, it is now clear that Indigo is the prospective buyer of Frontier.

The opportunity at Frontier is big. Frontier had revenue of $1.4 billion last year, putting it at roughly the same scale as Spirit. However, whereas Spirit has one of the highest pre-tax margins in the airline industry, Frontier is barely profitable. The main difference is that Frontier has higher non-fuel unit costs than Spirit. Yet if a buyer can find ways to continue cutting costs at Frontier, the company has the potential for substantial margin expansion, creating lots of value for owners.