Maybe Jim Cramer should have listened to me when I wrote about AFC Enterprises, Inc. (NASDAQ:AFCE) , the owner of Popeye’s Louisiana Kitchen and Popeye’s Chicken & Biscuits quick serve restaurant chains, in October when it was in the mid-$20s. He recommended the stock this week, and it closed at a 52 week high of $33.66 on March 8.

As I wrote in October, this company had a very challenged past and had to sell off some of its prime assets (Cinnabon, Seattle’s Best Coffee, and Church’s Chicken) after it was embroiled in the Arthur Andersen accounting scandal and had to pay off its tax obligations. It’s taken almost ten years to bring the company out of that mess, with only the one asset left to play their hand.

The company was founded in 1972 in New Orleans and features spicy New Orleans specialties like the Cajun fried chicken and shrimp, jambalaya, red beans and rice, etc. In the US the restaurants are mostly clustered in the Southeast. Their food is tasty but my homemade jambalaya bets theirs by a country mile.

Give Me A Ten Bagger With Cajun Fries

Yet with only one asset left to its name, AFC Enterprises, Inc. (NASDAQ:AFCE) is this close to being a ten bagger from its low during the recession around four dollars. There has been increasing interest in this name, with institutions buying heavily, according to Investors Business Daily. Although this is only a small indicator, it is running across the scrawl on CNBC on a fairly regular basis. In addition, trading volume has been heavier, with AFC trading more than twice the usual volume on March 8. While individually these may seem to be trivial, put together they’re painting a pretty picture of higher prices to come. You can see on the chart almost to the day when Cramer touted the stock. 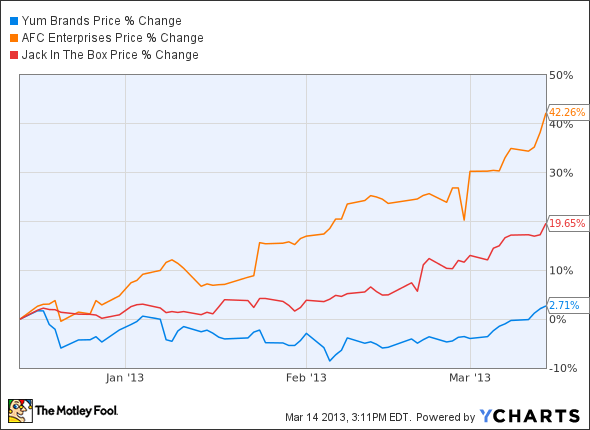 It’s less than 10% away from the analyst median price target of $36.00 but that’s only from four brokers. Analysts expect a 15% five year EPS growth rate. AFC Enterprises, Inc. (NASDAQ:AFCE) reported full year results for 2012 on Feb. 27, and the results were as hot and spicy as expected, with adjusted EPS up to $1.24, a 25% improvement over $0.99 in 2011. Free cash flow rose 20% to $36.8 million, and the company opened a net total of 66 stores after subtracting the 75 they closed. They also announced they had bought back 144,000 common shares throughout the year, with another $51 million authorized for more buybacks.

Of interest is that they are refurbishing 60% of their domestic restaurants to their Popeye’s Louisiana Kitchen concept, and are expanding by a reasonable 6% per year. They guided that next year the pace of expansion would stay slightly under that 6%, with 185 new openings planned for 2013. Currently they number 2,104 restaurants in the US and 26 foreign countries.

They also guided that commodity costs would be essentially flat for 2013 and still expect a double digit rise in EPS for 2013 at anywhere from 10%-14%. These numbers also cap off three consecutive years of same store sales increases.

Too Hot To Handle

Even with great numbers and planned expansion, both domestically and internationally, this franchiser and operator is trading at a silver and tablecloth P/E of 27.15 and a forward P/E of 20.28, with a PEG of 1.56 signaling some stretched valuation. The stock has more than doubled this past year.

An operating margin at 28.69% and a return on equity of 126.69% are impressive. Their expanded advertising seems to be working with these numbers they’ve been reporting. For the last five years they’ve been using the cash they generate to pay down debt and buy back shares.

A Closer Look At This Food Giant: McDonald’s Corporation (MCD)