No other metal is quite like gold. Physically, its malleable, it does not tarnish, it conducts electricity. Gold can just as easily be pulled into a wire as it can be hammered into a thin sheet or cast in a mold. And, there is also that certain aesthetic appeal.

But the real difference between gold and most other metals is that gold has another, intangible quality. Its an investment asset. Gold appreciated at a torrid pace from the mid 2000s through Q4 2012, but has since reversed. Has the trend been broken, or is this a temporary correction? What is driving the suddenly new world of investment gold? 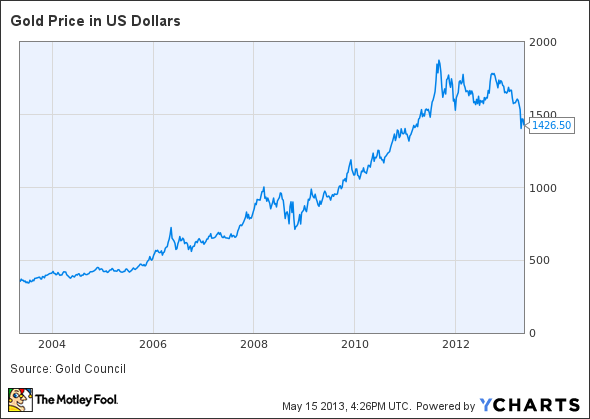 Gold has three general uses, all of which contribute to the underlying value of the investment. There is demand for gold for use in industry, demand as a liquid asset alternative to cash, and demand as a safe harbor to market and inflation risks.

Are people just wearing more jewelry?
The most obvious use is as a commodity with applications in industry, primarily as jewelry, but also in dentistry, technology, and others. According to the World Gold Council, demand for physical gold was down 4% year over year. Jewelry demand was down 3%.

Simultaneously, new gold supply was up 2% while recycled gold supply was down 5%. All said, supply and industrial demand were by and large equal — so we can conclude that industrial use is not the driver behind the volatility in gold prices.

That leaves the investment community
Within the investment world, demand for gold can generally be broken down into two components: a liquid alternative to cash, and a safe harbor hedge on inflation and broader economic risks.

First, gold is a liquid investment. According to a 2011 study by the London Bullion Market Association, over $15.2 trillion of gold was traded in the first quarter of 2011 alone.

For comparisons sake, if we assume an average share price of $13 for Bank of America in April 2013, the 2.9 billion total traded shares equal a monthly exchange of $37.7 billion. Multiply that by three months, and Bank of America’s quarterly share volume equals approximately $113 billion. Based on these estimations, nearly 115 times more money was exchanged in gold than in one of the largest banks in the world.

This by no means a rigorous analysis, but it paints a very clear picture for just how liquid gold really is. With memories of Bear Stearns and Lehmen Brothers still fresh, institutional investors have flocked to gold, in part because it is a safe and liquid alternative to housing cash in a banking system rocked by turmoil.

The environment today has changed. The banking system in general is more stable, capital levels are significantly higher, and banks are no longer deploying leverage in the 25-30 times range. As the financial sector heals and confidence returns, the investment demand for gold as a liquidity play will decline. Lower future demand means lower future gold prices.