Unemployment is still a major issue. The Fed has pointed at the unemployment rate as a key number that influences their policies. Like a plague, unemployment has spread north to Canada, and Europe continues to lag.

Currencies are seeing a race to the bottom, with every bank trying to finesse their currencies into a price that is more acceptable to them. Japan, in an effort to avoid yet another lost decade, has announced more easing. The effect on the Yen was substantial, but it remains to be seen if the change has any staying power.

In the case of the U.S., the currency has gotten stronger against some others despite all the easing. That is likely to trigger another round of easing. A country with as much debt as the U.S. cannot have a currency that is too strong. 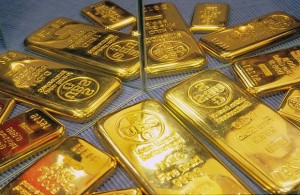 Gold ETFs for metal exposure with an option income attachment

Gold had a positive correlation with the stock market in the 2000s even if it was weak, if it also has a negative correlation during times of fear, gold should never decline considering the uncertainty and persistent worry of the last five years. Gold is an investment like any other. It is subject to the same forces, and that means that other factors besides fear and inflation can drive the price of gold.

I initially thought a 10% gain was possible before the about face, I now realize that I was wrong. SPDR Gold Trust (ETF) (NYSEARCA:GLD) is at $132, which is a new 52-week low. There are some problems, with SPDR Gold being an ETF with an expense ratio and holding only the metal, which is exacerbated by a decline in my opinion. It has to sell gold to pay its expenses, which leads to a divergence in the price of the ETF from the spot price of gold. Expenses stay relatively fixed, so the further gold falls the more gold has to be sold.

There is a new gold ETF, Credit Suisse Gold Shrs Cov Call Exc ETN, that both owns shares of SPDR Gold and sells calls on the gold to generate an income. The ETF owns shares of physical gold through shares in SPDR Gold Trust (ETF) (NYSEARCA:GLD), while generating an income through writing covered calls. It means that expenses come out of that income, though shares will be sold if that income falls short. The downside is that covered calls will cut the upside on gold if it moves very fast in a short period of time.

The strike price is around 3% out, and the calls are repurchased before expiry to ensure they do not get assigned, with shares being sold to cover the cost of buying back the calls if necessary. It is a brand new ETF, and the first of its kind for gold that I have seen. You should consider looking at whether Credit Suisse Gold is right for you. A quick reverse on gold’s decline might actually hurt the covered call ETF, because it sells calls only 3% out from the current price.

Barrick Gold Corporation (USA) (NYSE:ABX) was originally up for consideration here, since miners might do better than the metal. After some research, I found that miners might actually be worse, since gold in the ground is getting harder to come by. The company is not even on great footing to absorb this decline in gold. Barrick took a huge impairment charge related to its copper business at the end of 2012, which has driven its EPS ttm into the red.