Stocks are back to their winning ways for September this morning, with the S&P 500 (INDEXSP:.INX) and the narrower, price-weighted Dow Jones Industrial Average (INDEXDJX:.DJI) up 0.06% and 0.27%, respectively, at 10:05 a.m. EDT.

Gold’s outlook: Gloomy
I haven’t mentioned my old friend gold in some time, and I thought it was worth saying a few words about the precious metal. The following chart shows the year-to-date performance of the SPDR Gold Trust (ETF) (NYSEARCA:GLD) against the S&P 500 (INDEXSP:.INX): 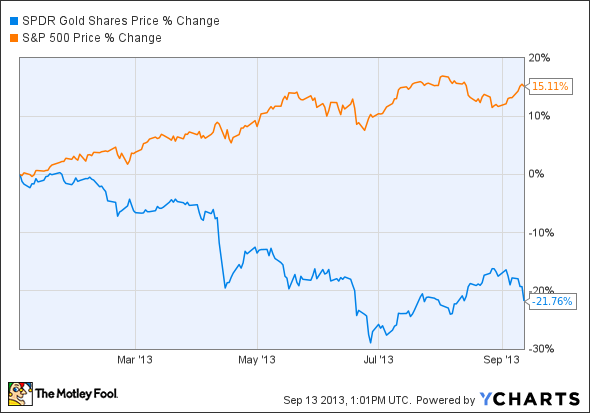 It’s no secret that gold has had a dreadful year, but the metal had begun to recover from its June low of $1,192 per ounce on the back of a spate of poor economic data and the rise of political risk (Syria), running all the way back up to $1,419.50.

However, with the possibility of a U.S. military strike against Syria fading, while the Federal Reserve’s “tapering” of its bond-buying program now looms large — the FOMC meets next week — September has not been kind to gold, which, as of yesterday’s close, had fallen 4.8%.

Naturally, this latest decline could easily reverse over the weeks and months to come, but barring the eruption of a major crisis (unlikely, in my view, though not impossible), the longer-term outlook for gold is not favorable.

Although the Fed has said it does not expect to raise its policy rate until 2015, real interest rates will increase in the years to come; that is as close to a certainty as you will find in investing. The benchmark 10-year bond yield has already shown it has that capacity this summer, and as rates normalize, they’ll sound the death knell for gold — and you can take that to the bank.

Berkshire goes to war
There is an interesting story about an ongoing clash between Berkshire Hathaway Inc. (NYSE:BRK.B) and American International Group Inc (NYSE:AIG) that ran in yesterday’s Wall Street Journal (you can read it here on Yahoo! Finance). At stake: the commercial-insurance business, and, specifically, an area known as “excess-and-surplus” insurance, which the Journal qualifies as a “roughly $25 billion U.S. market [that] involves selling often-large amounts of coverage to businesses in contracts tailored to specific risks such as policies to protect against hurricane damage.”

This area has traditionally been very profitable for American International Group Inc (NYSE:AIG), so it’s no wonder that it has attracted Warren Buffett’s eye. Boasting plenty of existing expertise in pricing unusual insurance risks, savvy risk-management, and heaps of capital, Berkshire Hathaway Inc. (NYSE:BRK.B) is ideally suited to mount an assault in this business. Or as Mr. Buffett said at Berkshire Hathaway Inc. (NYSE:BRK.B)’s last annual meeting, in May: “I think you will see us become a very significant factor worldwide in the commercial-insurance business. It could be a business that reaches into the billions. We’ve got the right people. We’ve got capital like no one else has.”

The article Gold’s Gloom and Berkshire’s Multibillion-Dollar New Market originally appeared on Fool.com and is written by Alex Dumortier, CFA.