Four years after the depths of the financial crisis — caused by a bursting housing bubble — the housing market looks like it’s back on its feet. The National Association of Realtors recently reported that the median home in the U.S. sold for 13.7% more than a year ago to $213,500. Sales are up, prices are up, and inventories are down, all great signs for the housing market. The positive data has helped investor confidence and as one of the bright spots of the economy has helped push the Dow Jones Industrial Average 2 Minute (INDEXDJX:.DJI) and S&P 500 (INDEXSP:.INX) higher this year. Improving data should help drive housing and stock markets over the next year as well… or will it?

There are reasons to be concerned that the housing market is getting ahead of itself, spurred on by ultra-low long-term rates. Below I’ll show you why you should temper your belief in a housing recovery.

No one is selling homes
One of the drivers of rising home prices over the past year has been rapidly falling inventory. Those who are underwater on their mortgages aren’t selling, fewer people are moving for jobs, and with rents rising around the country many homeowners are choosing to rent homes and condos instead of selling. That combined with rising sales has shrunk inventory available in the market, as you can see below. 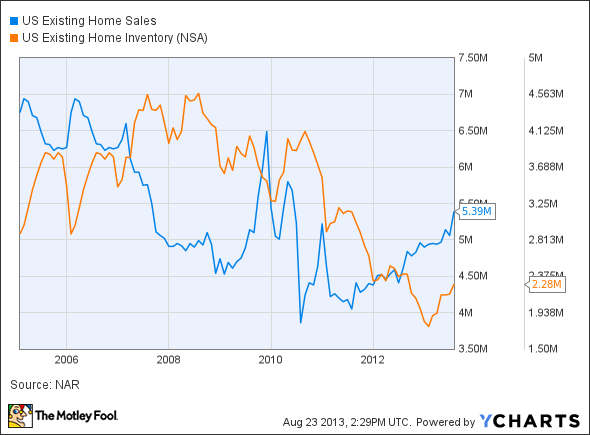 A simple look at supply and demand will show part of the reason home prices are up. With more buyers than sellers, it’s been a seller’s market and concessions and prices that were common a year or two ago have evaporated.

Mortgage rates were at record lows
Driving the flood of buyers over the past year was record low mortgage rates. Until rates started rising in May you could get a 30-year mortgage for 3.5%, an incredibly low rate that brought buyers into a new price range. This helped drive prices higher because mortgage payments were lower, but it also poses a problem going forward. 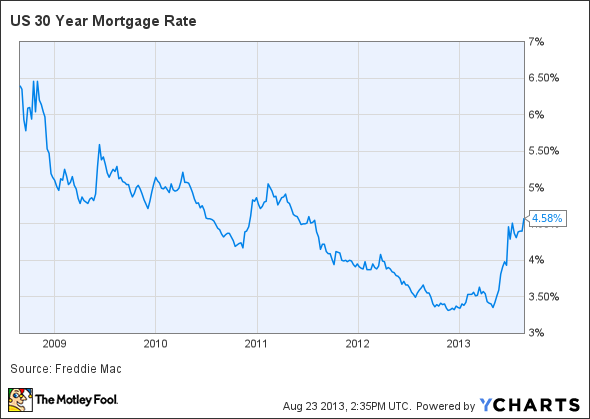 When the Federal Reserve began talking about slowing an $85 billion per month asset purchase program — known as “tapering” — the market pushed rates up swiftly. That has a huge impact on the affordability of homes. Below is a table showing the monthly mortgage payment of 15-year and 30-year mortgages on a $200,000 loan at various interest rates.

Low rates have helped bring more buyers to the market in recent years and allowed them to buy more house, but now we’re headed in the opposite direction.

Bad news is coming
Data coming from the housing market aren’t terrible yet, but a big reason is the lag time associated with buying a home. You may lock in an interest rate in May and not close on a home until July, so data based on today’s rates won’t be available for months. But early indicators aren’t good.

The Mortgage Bankers Association says mortgage applications have fallen week over week for 9 out of the last 10 weeks, showing a consistent deterioration in the number of buyers hitting the market. The association’s Refinancing Index is also down 62.1% from its peak during the week of May 3, a rapid drop in refinancing.

The next step is for housing prices to stabilize and possibly fall and pending home sales to slip as fewer buyers reach the market.

Foolish bottom line
Don’t expect the housing market to collapse like it did from 2007 to 2009, but we shouldn’t expect double-digit price increases to continue either. Inventory is abnormally low, interest rates are rising, and incomes aren’t growing fast enough to push the market higher.

The big impact for stock investors could be in the new construction market. The low inventory of homes has sparked building around the country, which has added thousands of jobs to an industry hard hit during the financial crisis. But if rates rise too fast the industry could fall again. Watch new home construction, mortgage applications, and pending sales in the coming months to see how the market absorbs rising interest rates. This could be a clue to how the overall market does over the next year.

The article Housing Market Recovery May Be Short-Lived originally appeared on Fool.com.