Sotheby’s (BID): Are Hedge Funds Right About This Stock?

Concerns over rising interest rates and expected further rate increases have hit several stocks hard since the end of the third quarter. NASDAQ and Russell 2000 indices are already in correction territory. More importantly, Russell 2000 ETF (IWM) underperformed the larger S&P 500 ETF (SPY) by about 4 percentage points in the first half of the fourth quarter. Hedge funds and institutional investors tracked by Insider Monkey usually invest a disproportionate amount of their portfolios in smaller cap stocks. We have been receiving indications that hedge funds were paring back their overall exposure and this is one of the factors behind the recent movements in major indices. In this article, we will take a closer look at hedge fund sentiment towards Sotheby’s (NYSE:BID).

Is Sotheby’s a great stock to buy now? Prominent investors are betting on the stock. The number of long hedge fund positions moved up by 5 recently. Our calculations also showed that BID isn’t among the 30 most popular stocks among hedge funds. The company has been the subject of a number of articles here at Insider Monkey, a look back at them will help our readers get a fairer idea of its financial position and history. Here are some of those articles, Is Sotheby’s (BID) A Good Stock To Buy Now?, How Marcato Capital’s Bets on Sotheby’s (BID), Signet Jewelers Ltd. (SIG) & Two Other Stocks Performed in Q3 and Sothebys (BID): Billionaire Daniel Loeb’s Third Point Bids On A Few Shares.

Our readers will be interested to know that Thomas S. Smith, Jr., the Chief Executive Officer and President of Sotheby’s, was responsible for the last major insider purchase of the company’s common stock. The executive snapped up 15,250 shares at $40.96 in November. With the stock currently trading at $37.25, it was certainly a vote of confidence on the company by its head honcho. 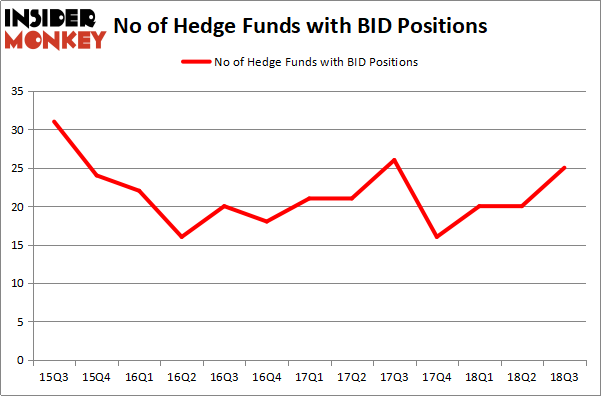 According to publicly available hedge fund and institutional investor holdings data compiled by Insider Monkey, Third Point, managed by Dan Loeb, holds the biggest position in Sotheby’s (NYSE:BID). Third Point has a $327.7 million position in the stock, comprising 2.3% of its 13F portfolio. On Third Point’s heels is Paul Marshall and Ian Wace of Marshall Wace LLP, with an $18.7 million position; the fund has 0.2% of its 13F portfolio invested in the stock. Remaining hedge funds and institutional investors that are bullish consist of D. E. Shaw’s D E Shaw, Chuck Royce’s Royce & Associates and Kenneth Squire’s 13D Management.

With a general bullishness amongst the heavyweights, some big names were breaking ground themselves. Holocene Advisors, managed by Brandon Haley, established the largest position in Sotheby’s (NYSE:BID). Holocene Advisors had $0.7 million invested in the company at the end of the quarter. Andrew Feldstein and Stephen Siderow’s Blue Mountain Capital also initiated a $0.5 million position during the quarter. The other funds with brand new BID positions are Michael Platt and William Reeves’ BlueCrest Capital Mgmt., Mike Vranos’ Ellington, and Gavin Saitowitz and Cisco J. del Valle’s Springbok Capital.

As you can see these stocks had an average of 14 hedge funds with bullish positions and the average amount invested in these stocks was $503 million. That figure was $443 million in BID’s case. Genomic Health, Inc. (NASDAQ:GHDX) is the most popular stock in this table. On the other hand Union Bankshares Corporation (NASDAQ:UBSH) is the least popular one with only 4 bullish hedge fund positions. Compared to these stocks Sotheby’s (NYSE:BID) is more popular among hedge funds. Considering that hedge funds are fond of this stock in relation to its market cap peers, it may be a good idea to analyze it in detail and potentially include it in your portfolio.