Sorry Apple Inc. (AAPL), Microsoft Corporation (MSFT) Bears, There Are Too Many Reasons To Be Bullish

I am closely following these three well-known large cap technology companies, and believe that each is a positive addition to any investor’s portfolio. As is always the case, investors need to keep in mind that diversification across many sectors is king.

Apple has a fantastic risk/reward ratio and it would not be unrealistic to see $600 by this time next year. Granted, Apple does have decelerating earnings in a much more intense competitive environment, but the current price already reflects the increasing competitive pressures, and does not properly factor in a return to growth in 2014, as gross margins stabilize and a number of catalysts could drive growth. 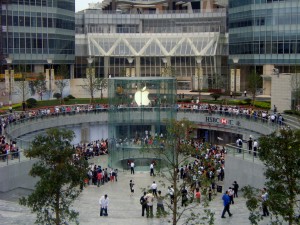 Apple Inc. (NASDAQ:AAPL) has an ace in the hole with their upcoming blitz of China, with a lower-cost iPhone reportedly in the final stages of development. The iPhone is already performing well in urban China with impressive growth rates of 25%. By offering a cheaper iPhone, Apple can be crowned as the “King of China”. Trading in the ~$400 range, Apple Inc. (NASDAQ:AAPL) offers an attractive entry point to investors with a longer term frame of mind.

Finally:  After ten years, this tech giant’s stock is finally taking off

I will be the first to admit that I am not a fan of owning Microsoft Corporation (NASDAQ:MSFT) stock. In fact, I have been highly critical of the tech giant for not doing enough to satisfy shareholder demands. Today I changed my mind.

Despite growing concerns about a global slowdown in PC sales, shareholders can rejoice that the stock is trading near a 52-week high. Part of the reason for the rise in Microsoft Corporation (NASDAQ:MSFT)’s stock was an announcement that a major hedge fund, ValueAct Capital Management, disclosed a whopping $2 billion stake. Coupled with a better than expected quarterly earnings report, the stock might finally be poised to end its 10+ year drought.

Looking at the stock since March 11, Microsoft is up 11% while the S&P 500 is down 0.3%. From a technical point of view, Microsoft Corporation (NASDAQ:MSFT)’s 50 day moving average ($28.34) has been rising since late January and approaching the 200 day moving average of $28.69. Both fundamental and technical analysts make an extremely positive case for an investment in Microsoft.

Sit back, grab some popcorn and enjoy the show!

It’s official: Netflix, Inc. (NASDAQ:NFLX) is a winner, and there aren’t many other companies like them. Its product is not only fantastic, with one of the highest customer satisfaction rates, but it is doing all the right things to continue satisfying both shareholders and customers.

Apple Inc. (AAPL): What Would You Pay for a 1976 Woz Original?
Monthly Newsletter Strategy
Download a free copy of our newsletter and see the details inside!
Hedge Fund Resource Center
Billionaire Hedge Funds