It was a rough week for stock markets this week, and solar stocks were no different. Across the board, solar stocks fell, and some even dropped more than 10%. 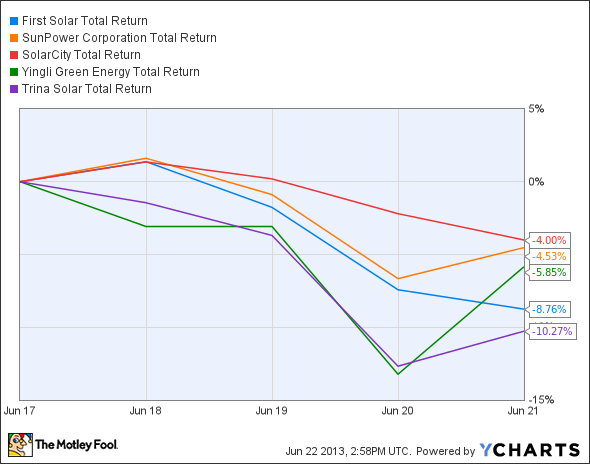 But that doesn’t mean it was a bad week for the industry as a whole. Here are some of the newsworthy items in solar this week.

Money, money, money
First Solar, Inc. (NASDAQ:FSLR) became the latest to offer shares of convertible debt to the market in an effort to raise cash. The company sold 9.45 million new shares at $46 for proceeds of about $427.7 million to the company.

The sudden trend of offering up new shares or debt has come about because solar companies can now take advantage of high stock prices to get new cash from investors, instead of groveling the way they’ve been doing in years past. Keep an eye on expansion plans with this new cash and how these three companies position themselves to win the future of solar.

SolarCity bullish on distributed solar
The residential solar market grew 53% in the first quarter, and SolarCity Corp (NASDAQ:SCTY) is seeing more growth in the future. The company raised its 2013 installation guidance to 270 MW from 250 MW, the latest bullish sign for distributed solar.

SolarCity Corp (NASDAQ:SCTY) is a great pure play in this growing market, and SunPower Corporation (NASDAQ:SPWR) has exposure to solar leasing as well. The growth in distributed solar makes these two of the top plays in solar.

European tariffs
Chinese solar manufacturers could potentially get a boost if rumors of a resolution over solar dumping between the EU and China come to fruition. On June 6, the EU implemented an 11.8% tariff, but these tariffs jump to a range of 37% to 67% on Aug. 6 if a broader agreement isn’t reached. Europe is looking for solar companies to raise prices to a level above “dumping,” which means Chinese companies can’t sell at a loss.

We don’t know what the exact deal entails right now, but it’s being reported than an agreement is close, which would be good for Chinese solar manufacturers. If there are no tariffs and they have to raise prices, they may expand margins in Europe and help their own financials. Ironically, most manufacturers have focused their attention on Asia for demand recently and backed away from Europe, so it will be interesting to see who may benefit from any agreement. Stay tuned for more.

Foolish bottom line
The residential solar market continues to be hot, and this is the future for investors in solar. Utility-scale projects are slowly dying down, and companies like First Solar will have to adjust to that in the future.

The article This Week in Solar originally appeared on Fool.com and is written by Travis Hoium.