I’ve identified a handful of companies that use the so-called “razor and blades” model to deliver predictable, long-term results. Some are just starting, some have a sustained record of success. But all of them are part of my retirement portfolio, which means I’m hoping to hold them forever. Go here to see how I’m doing. Will you learn more from my successes or my inevitable mistakes?

Razors and blades: The secret to sustained success

The disposable razor was invented in the early 1900’s, but it was King Camp Gillette’s competitors that were first willing to lose money on the razors to make money on the blades years later, when Gillette lost patent protection. Over a century later this strategy is assigned to any company that counts on sustained revenue generated by something required to use the item purchased. And while in many cases the company still makes plenty of money on the “razor,” it’s still the “blade” that, as an investor, holds the key.

Bubbles, syrup, and the power of convenience

Consumption of soda in the U.S has been on a slow decline for several years. And while international expansion remains a decent opportunity for companies like The Coca-Cola Company (NYSE:KO) and PepsiCo, Inc. (NYSE:PEP), I like Sodastream International Ltd (NASDAQ:SODA)’s potential far more. As Amazon.com, Inc. (NASDAQ:AMZN) has shown us, the ease of being able to pick out items and have them delivered to your door is a powerful advantage, and I see a similar benefit in the convenience of home-based systems like Sodastream International Ltd (NASDAQ:SODA).

And while it’s not the same as clicking your mouse and opening a box the next day, not having to lug heavy bottles of soda home from the store, or take up room in the pantry, the convenience of adding syrup and bubbles to your own filtered water at home is a powerful draw for many people (myself included).

The company has grown significantly since it went public, indicating plenty of people see the value. And while the share price has really gone up this year, the company still looks to be relatively affordable, if you know what to look for: 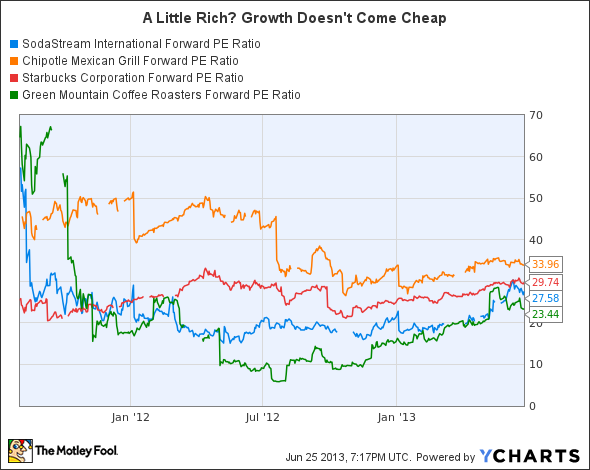 Valuation metrics require context. Shares of Sodastream International Ltd (NASDAQ:SODA) are up over 50% YTD. But as you can see above, its forward PE valuation is well within the range of several other fast-growing, profitable companies. But as with any investment, there is risk to consider.

The two biggest risks to Sodastream International Ltd (NASDAQ:SODA) are related to the giants in the soda biz. First, consumer adoption. The company must continue to attract customers away from other brands, and it may be a challenge to attract those that are loyal to a certain beverage. On the other end of the market, those that buy store-brand sodas may balk at spending $79 or more on a machine to take home. Simply put, the company has to continue to attract consumers in the middle.

Additionally, there is a chance that, if the company continues to take market share, The Coca-Cola Company (NYSE:KO), PepsiCo, Inc. (NYSE:PEP) or Dr Pepper Snapple Group Inc. (NYSE:DPS) will either enter the home game or attempt to acquire the company. While I think the latter is a more likely scenario, the former is a consideration. For either to become a reality, there will need to be a lot of growth first. I’m betting that there will be.